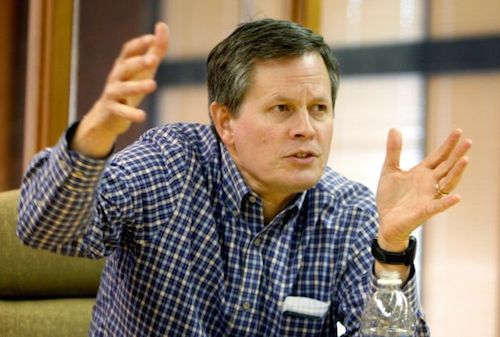 The Democratic Party of Montana has found a replacement for lurching plagiarist John Walsh: Amanda Curtis, high school math teacher and Butte resident, presumed plucky. And she is getting the full disbursement of leftover Walsh funding allowed by law: two thousand dollars. Meanwhile, an entity called the Lee Newspapers State Bureau reports that about one third of Republican Steve Daines’s $5 million in campaign funds came from within the state. That’s actually a lot for a small-population Senate race.

While you turn on the oven and I find a towel to lay over the rack, let’s consider why getting a third of your money from voters in your state is pretty good for candidates in places like Montana. As James Madison warned us, each state gets the same number of votes in the Senate.*

If you’re looking to maximize your ratio of votes in the Senate to dollars spent, you can pick up one by convincing only about half a million people in Montana.

As we all learned in Student Council, it takes approximately ten dollars to convince a person to vote for you. Daines’s $5 million is therefore right on. It’s just that people who live in Montana were only able to pay for about $1.6 million of their own convincement, so they had to turn to outside sources to tell themselves how to vote.

Again, Daines got less of his money from out-of-state donors and political action committees than most people who run for the Senate in low-population states. His $5 million dollars means Amanda Curtis will have a great time the way a leaf has a great time in the wind, but the $1.6 million he got from Montana would do that, too. I don’t think this funding structure delegitimizes him any more than his goblin ancestry. But it should make us think about what the Senate represents.

Here’s James Madison in Federalist No. 39:

One feature of the Senate is that it satisfies people who consider the state the fundamental unit of United States government. If you think of the federal government as a bunch of little societies that got together for the common defense and cheaper health insurance, the Senate gives each of those societies equal weight. Even as it joins a national government, each state retains its societal identity. The Senate allays the worry that national identity will trump societal ones. Madison puts it better than I do, but the point is the Senate reflects the idea that states are important.

When two thirds of the funding in a Senate race comes from outside the state where people are voting, though, national identities assert themselves. The national parties and the entities who lobby them see the Senate not as a negotiation among 50 societies, but as a zero-sum game between two factions. Even if they come from Virginia, they can increase the power of their faction more effectively by spending their money in Montana.

To paraphrase Alexander Hamilton, that’s not wrong; it’s federalist. It’s difficult to say how important state identity is in 2014, now that we all wander around the country like Joads. But if you live and vote in Montana, it is not difficult to say whether Senator Daines will represent you or the Republican Party of the United States.

Given that we’re talking about our delegate to a legislative body of the United States government, that’s okay. It only has the potential to cause problems in situations where national entities might benefit at the expense of Montana—in resource extraction, for example. But this point is moot, because Daines is going to win. Amanda Curtis will make a series of amazing speeches, and Steve Daines will be the next Senator form Montana.

Then he will represent our interests in Washington for the next six years. Definitely he is from Montana, but his money is from someplace else. He lives someplace else. He enjoys the relative density of trees or bemoans the lack thereof someplace else. As Senator from the society of Montanans, he is half our interest in Medicare, Middle Eastern wars, and whether we all get AK-47s or joints. I wonder if he is one of us.