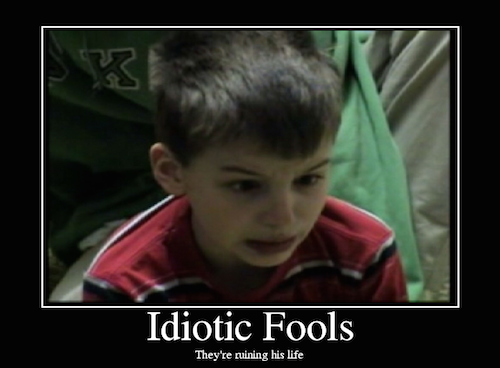 Nietzsche wrote that it is meaningless to say this life is good or bad, because we have nothing to compare it to. I feel the same way about people. It seems like the general run of them is infuriatingly stupid and awful, plus proud, and this feeling only intensifies when you get the internet. But to whom are we comparing them? The dead people we know from history are instances of selection bias, and our selves are not exactly paragons. It’s possible that all men are fools, as Boileau says, and with every effort they differ only in degree. You have to love them, though, because your alternative is to be miserable. Today is Friday, and other people pit our honesty against our happiness. Won’t you try to broker a settlement with me?

Like all things true in retrospect, it was only a matter of time before Cliven Bundy blew it. He’s been saying stupid things about the federal government for weeks, but it was not until yesterday—when his daily press conference attracted but one reporter—that he started talking about black people. I quote the Times:

“I want to tell you one more thing I know about the Negro,” he said. Mr. Bundy recalled driving past a public-housing project in North Las Vegas, “and in front of that government house the door was usually open and the older people and the kids—and there is always at least a half a dozen people sitting on the porch—they didn’t have nothing to do…And because they were basically on government subsidy, so now what do they do? They abort their young children, they put their young men in jail, because they never learned how to pick cotton. And I’ve often wondered, are they better off as slaves, picking cotton and having a family life and doing things, or are they better off under government subsidy? They didn’t get no more freedom. They got less freedom.”

It’s kind of ironic that Bundy decried “government subsidy” during the armed standoff that erupted because he insists on grazing his cattle on federal land for free. Now that I’ve rearranged these deck chairs, the Titanic is sinking. What kind of person drove past a project one time and therefore regards himself as qualified to expound on the Negro to the national press?

Answer: an ordinary person. The problem of others is that everyone else is experiencing it, too. People are incapable of imagining that somebody else might, like, perceive their behavior and have similar needs and stuff. Case in point: Kara Bonneau bought a personal picture package from the Boston Marathon, only to find photos of the other four people who bandited her number. Apparently in footraces, to bandit is to run unregistered with counterfeit tags, or to replicate someone else’s tags. It would have been the perfect crime, if somebody hadn’t taken pictures of everyone who finished. Now Bonneau has her own facebook of four mysterious assholes. It’s probably a coincidence that they’re all wearing headbands.

My guess is they started wearing them when they were young, around the same time they decided that marathon/property rules did not apply to them, and they just kept going with that value system. Over at the delightfully empirical Five Thirty-Eight, Dan Hopkins argues that most Americans establish their partisan loyalties around age 18, based on what’s going on in politics at the time, and keep them for life. Props to The Cure for the link. Maybe the most fun part of the article is the graph where George W. Bush creates a generation of Democrats. It would perhaps be better if the American electorate did not govern according to how the country was going during their childhoods, but we’ve solved that problem: the American electorate does not govern.

The fatal flaw in the Princeton oligarchy study, of course, is that the A.E. might simply profess ideas that it doesn’t really support. Take Jesus: everybody loves him and wants to do what he says, except in those cases when it might infringe on their comfort. In Davidson, North Carolina, one local woman responded to a statue of “Homeless Jesus” sleeping on a park bench by calling the police. Pleasingly-named sculptor Timothy Schmalz has built a magnet for irony. He says his work is to “glorify Jesus” and contrast the life of the biblical ascetic with our contemporary attitudes toward poverty. He may also be trying to get Davidson residents to say stuff like this:

My complaint is not about art-worthiness or the meaning behind the sculpture. It is about people driving into our beautiful, reasonably upscale neighborhood and seeing an ugly homeless person sleeping on a park bench.

This man’s complaint is in fact about the meaning behind the sculpture. He agrees that it’s art-worthy and that Jesus commanded us to love the poor, but also the statue is ugly and might make people think homeless people are allowed in his neighborhood. What’s important is that people hear his opinion.

Recognize he’s a fool, and I love him. What else can you do with people? You’d rather everyone were smarter than you? Better that a large swath of the populace embarrass itself for our amusement. Best would be if people pretended to be fools but were in fact really clever and great, but that is almost always too much to ask. Almost: