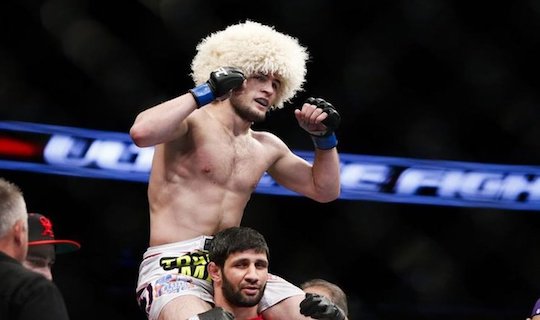 I went this whole winter without getting sick but now, in the last month, I find my throat is scratchy and my skin hurts. Obviously, I’m not sick. That would mar my perfect record. And I’m fencing in Bozeman tomorrow, so regardless of the condition of my immune system, I am by definition healthy enough to poke and get poked with car antennas. The trick is to ignore the feedback coming from your body. It’s an illusion, as any religion will tell you. Just don’t think about all the people you know who have died, and all the depictions of people sickened unto death that you have seen in movies. Today is Friday, and too much movie make your heart weak. Won’t you push through with me?

First, the good news: That dubious use of English comes not from me but from UFC lightweight Khabib Nurmagomedov, whom the goddamn Chive asked to summarize the plots of romantic comedies in this video:

Oh, Nurmy. You so eastern European. The bad news is that as of this writing, he has not weighed in for his title bout at UFC 209 tomorrow night. He did go to the hospital this morning…and it’s cancelled. The interim lightweight title bout between Khabib Nurmagomedov and Tony “El Cucuy” Ferguson at UFC 209 is cancelled, you guys. This is the third time a bout between these two competitors has been canceled for medical reasons. If there were a rock at my feet, I would kick it.

It just goes to show you that hope is a fool’s fortress. Is that how the saying goes, or was it pride? Wealth seems kind of like a fool’s fortress, too. The old saying should say that safety is an illusion, but all the words should start with f. While I get to work on coining that one, how about you read about what’s become of Rachel Dolezal? Remember her? She’s the white lady who pretended to be black and rose to a position of power in the Spokane NAACP. Wasn’t that an awful thing for her to do? I thought it was. You probably agree, and that’s why we both feel great knowing that she’s living on food stamps and expects to be homeless next month. “The only work she has been offered is reality TV, and porn,” Decca Aitkenhead writes in an empathetic but clear-eyed portrait. She applied for another job at Eastern Washington University, and her old colleagues pretended not to recognize her. Don’t get me wrong: what Dolezal did was bad and probably offensive. But is it shutout from society-level bad? How important is what she did, in terms of how totally we are punishing her for it, as opposed to how often we think about it?

Here’s a fun and probably unfair comparison: How much did Dolezal materially worsen Americans’ lives compared to, say, Hillary Clinton? Clinton did lose to the weakest presidential candidate in modern history, not just by having little talent for public speaking but also through unforced errors like not holding press conferences and under-campaigning in the Upper Midwest. But I don’t want to criticize Hillary, because that would make me the same as the alt-right. If you agree with that logic, you might enjoy James Wolcott’s essay Why the Alt-Left Is a Problem, Too. It’s an astoundingly tenuous argument from a firmly established writer. In his defense, though, he seems to have been writing pretty hard. Here’s the first sentence:

I feel like we can shorten “mental tooth decay” to “brain decay,” which will solve the awkward Reddi-wip clause by making it unnecessary, leaving us with “Eileen Jones’s clickbait article is bad for your brain.” That might be true, but punch up, dude. Why does the culture editor at Vanity Fair start by nailing the film critic at Jacobin? And how does he go on to reason that the alt-left, which regards “rising alarm over the Russian cyber-warfare as a rehash of Cold War bogeyman tales,” is therefore similar to the alt-right, which idolizes Putin? If you think the Russia-hacked-the-election narrative is overblown, you must love Russia. Wolcott winds up by saying that if the whole thing is a plot by the intelligence community to wrest power from the president, bring on the deep state. I disagree. As much as I despise the Trump presidency, I think government by the CIA/NSA/Pentagon would be worse. I worry Wolcott is not the only moderate who is not sure about this seemingly basic principle.

This is just a friendly reminder that the security state is bad—not because security is bad, but because we all agree it’s good, and that encourages unscrupulous types to do bad things in its name. On a completely unrelated note, two state legislators in North Carolina have introduced a bill that redefines certain types of peaceful protest as “economic terrorism.” People who participate in demonstrations that cause “mass traffic obstruction” would be guilty of felonies, as would anyone who “commits a criminal offense that impedes or disrupts the regular course of business.” For reference, disorderly conduct is a criminal offense, and so is resisting arrest. A broad reading of this law would make it a felony to protest outside Starbucks. North Carolina is one of 16 states whose legislators have proposed such laws this year. Many of them use that same phrase, “economic terrorism.”