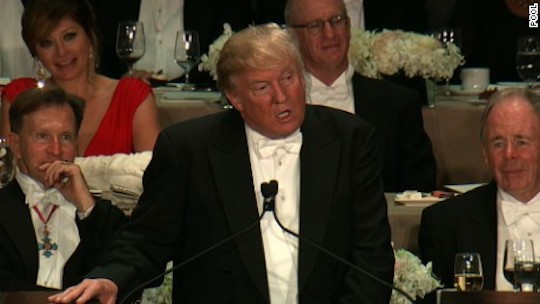 Donald Trump begins to bomb at the Al Smith dinner.

Donald Trump got booed at the Waldorf last night, when his remarks at the Alfred E. Smith Memorial Foundation Dinner went from sharp to blunt. A couple of his early jokes killed, but then he called Hillary Clinton corrupt and opined that she was “pretending not to hate Catholics” by attending the charity event. See, when you tell the crowd the next act hates them, they look on you with suspicion. Today is Friday, and you’ve got to know your audience. Won’t you peek between the curtains with me?

The good news is that Trump delivered easily the funniest joke of his political career last night.1 The bad news is he followed it with his life’s worst performance, one hopes. But before we go down and dwell in the blunderworld, let’s remember Trump at his best. Complaining that the press was biased against him, he said:

You want the proof? Michelle Obama gives a speech, and everyone loves it. My wife, Melania, gives the exact same speech and people get on her case.

Yes! Good work, Donald Trump, or good work to whomever you hired to write jokes for you—probably Jim Norton. This joke is funny, because it exaggerates Trump’s own qualities to the level of buffoonery. People like it when you laugh at yourself. People do not like straight vitriol, which what Trump gave the assembled Catholic socialites and clergymen for the next two minutes. Here’s he is bombing with his “Hillary is so corrupt” bit:

This video may be the highlight of the election, if only for the reactions of the man in the lower right-hand corner of the frame. It’s awesome they’re booing him. It’s awesome everyone else in the frame is a caricature of a blueblood, from the lady in red to the guy wearing a jewel-encrusted cross around his neck. It’s terrifying to think Trump might not understand the difference between his Melania joke and his remark, on Clinton’s experience, “What’s her pitch? The economy is busted, the government’s corrupt, Washington is failing. Vote for me.”

You’ve got to know your audience. Bishops and people who own cursed necklaces don’t want to hear you denounce your political opponents. They want you to reassure them that in spite of our political differences, we’re all rich. It’s like the way audiences at improv comedy shows want to shout out racially charged suggestions. That’s the report from Second City in Chicago, where the CFO, the President of Second City Theatricals, and several performers have left citing an increase in “racist taunts” from audiences. It seems like something is going on over there, possibly involving ticket-holding bigots “emboldened by Trump,” as the headline says—in quotation marks, with no corresponding quote or attribution int he story. Second City CEO Andrew Alexander does say that other factors also influenced the exodus, including “backstage discord” and “financial downsizing.”

Now that sounds like the live performance industry to me. As if improv comedy didn’t have enough to contend with, rents and competition being what they are. Now Americans are too racist for audience participation. Society changes, and what once pandered to popular taste now revolts us. You’ve got to know your audience. Clickhole knows me, because I cannot stop laughing at this image: 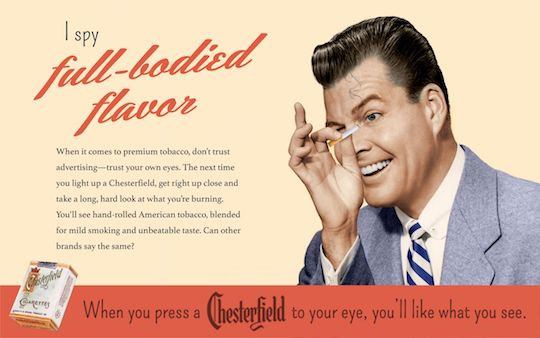 That’s just one of the delights contained in How Far We’ve Come: These Vintage Cigarette Ads Could Never Have Run Today. Let it never be said that Photoshop is not a tool of art. I particularly enjoy the Pall Mall ad, whose tagline suggests they are marketing their cigarettes not just to children but to anyone about to go to sleep.

That’s my target audience: dreams. HP Lovecraft wrote for them, and so do the good people at Wizards of the Coast. I had forgotten this post from five years ago, but someone commented on it this morning to defend John Finkel. I stand by most of what I said: Magic is not cool, and being cool is bullshit. Thank you, Justin, for making this weird little essay exist for me again.

While we’re being uncool: How is this recording of “Sally Brown” Laurel Aitken? It’s Mephiskapheles doing some sort of tribute to Laurel Aitken, right? Or playing as his backing band? The horn crescendos give it away, and Hollywood’s flat trumpet. I never should have written this paragraph. Either I am wrong or my expertise humiliates me.