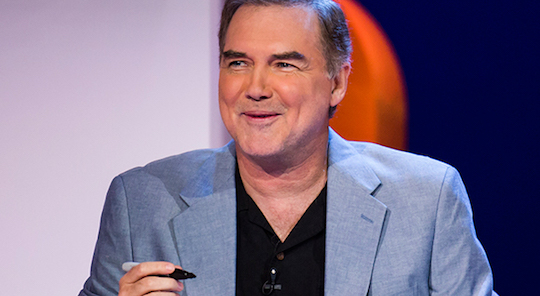 If your boss is a real Himmler type who doesn’t let you watch YouTube videos at work: Macdonald is the call-in guest on a radio show or podcast, where he tells the host he’s been working on his ventriloquism. Unfortunately, one of the dummies—his crotchety old man character—has been giving him trouble. This dummy is a virulent anti-Semite. He’s a Holocaust denier. He’s a real waste of wood, and Macdonald doesn’t know what to do with him. “One of my Jewish friends suggested that, you know, why don’t I just throw him in a fire and burn him?” he says. “But I say two wrongs don’t make a right.”

That’s very funny. As always, we can’t say conclusively why, but the broad category into which this joke falls is Failure of Perspective. The punchline implies Macdonald is looking for a solution not just to his bad dummy, but also to the historic horror of the Holocaust. His determination that the second wrong of burning a dummy wouldn’t make right the initial wrong of burning six million Jews suggests he sees some absurd equivalence between the two.

This joke absolutely would not work if he were talking about burning his anti-Semitic uncle. The trick, here, is to set up the false equivalence without evoking the essential unfunniness of burning people in ovens.1 Making the object of his equivalence a dummy gets around this problem, because it A) removes the human element while preserving the anti-Semitism and B) misdirects the listener with another premise he or she can easily understand.

Let us take a moment to consider how few elements would satisfy (A) and say no more of it. The genius is at work in (B). The premise that Macdonald has a ventriloquist dummy who is frustrating him with its virulent anti-Semitism is funny in itself. Macdonald righteously disavows the statements of a dummy he himself controls, in a weird and pleasing variation on the antagonistic “no, you’re the dummy” relationship at the center of every ventriloquist act. Probably, that dynamic is the only funny thing about ventriloquism.

The listener thinks he understands this premise and the rules of the game: Macdonald castigates the dummy for its awful views, when really they are his own. It’s funny to think of Macdonald—or the vaguely insane Norm character who is the speaker in jokes like this—as the real anti-Semite, who thinks he has found a safe way to express his forbidden ideas. You can tell the host considers this the premise of the joke by the big laugh at :48, when Macdonald says, “I’ve had it up to here with this character.” Then Macdonald hits him with the real joke, letting him come usefully close to synthesizing it himself with “Jewish friend” and “throw him in a fire and burn him” in the seconds before.

It’s a great misdirection. Macdonald pulls it off despite the best efforts of the host, who violates the basic duty of the straight man by trying to wedge in his own jokes during the setup. Just break the setup into manageable pieces by repeating key phrases, dude. But it doesn’t matter, because Macdonald is a pro.

The best part about this Holocaust joke is that it is in no way offensive. It makes a joke out of burning people in a fire, but it says that was wrong in the same breath. The misdirection premise is that we all agree anti-Semitism is bad, and the Holocaust shouldn’t be denied. Who knows what led Macdonald to think of this joke? But I would like to believe he set out to write it as a challenge to himself, and that he looks at jokes about the Holocaust and Hitler the way certain people look at Mount Everest. Most people can’t climb up there, but it is worth it to gasp in the rarefied air.