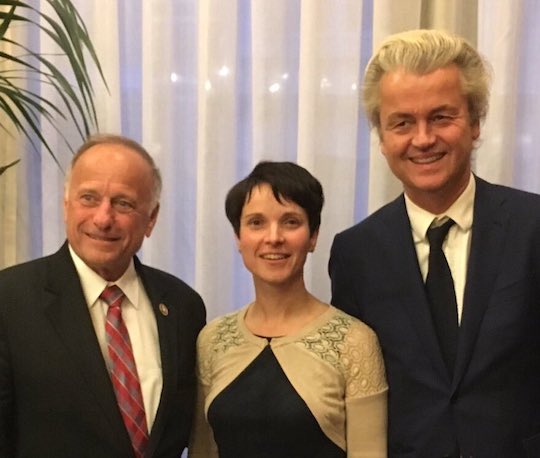 This morning finds friend of the blog and all-around badass Gina Patnaik putting it down on Rep. Steve King (R-IA) in the Des Moines Register. Gina is from Denison, in his district, and she is disappointed by King’s decreasingly coded racism:

So when you say that the changing racial demographic of our country is “cultural suicide,” I know what you mean. You mean me.

It’s a great letter, and I urge you to read it. I happened to interact with Rep. King regarding this cultural suicide business last week, when I called him an embarrassment to my home state on Twitter and he retweeted me, for some reason. Behold:

I wondered why he would do that. Did he not understand that it was criticism? Does he automatically retweet anyone who mentions him? Did he see the white sheet in my avatar and assume we were cool? These questions baffled me for about two minutes. Then came the Twitter Nazis.

It’s odd that King would retweet a statement calling him a white nationalist. From a certain perspective, it might read like an endorsement, as if he were embracing the label. For some time now, he has flirted with that identity, wondering in July what nonwhite groups ever did for civilization and casting children of immigrants as drug mules in 2013. But when he tweeted last week that “cultural suicide by demographic transformation must end,” he went from making thinly veiled remarks to openly repeating neo-Nazi cant. So maybe he retweeted me because he’s out and proud, now, as a white nationalist.

Or maybe he just wanted to sic Twitter Nazis on me. In the 48 hours after King retweeted me, I got hundreds of mentions calling me a kike, a fag, a cuck, an n-word lover, a traitor to my race, et cetera. Frankly, it was great. What straight white man doesn’t love being attacked by racists? When Twitter Nazis are mad at you, you are by definition in the right.

The thrill wore off pretty quickly, though. Twitter is designed to make you look at it every two minutes, and when the Nazis trickle in a half dozen at a time, it’s hard not to read them. Encountering a few hundred accounts in a row like this one is like falling through a tunnel of assholes. The ones whose profiles aren’t festooned with swastikas are people I would describe as sickeningly normal, putting pictures of their grandkids next to ideas like this. These people are a tiny sample of Twitter’s user base, itself a small fraction of Americans as a whole. But when you read a few hundred of them in a day, it starts to feel like they’re everywhere.

And how do you engage an idea like “USA was a shit hole before white people came and built Wall Street, Hollywood, etc?” Where do you even begin? At first, I thought I could find common ground with these people and get them to question their views. But there are no flaws in nonsense. You’re not going to convince these people of anything, because they start from the premise that white people are persecuted despite being superior to everyone else and go looking for justifications from there. You can’t dismantle their arguments for the same reason that no person who isn’t white has ever read up on white supremacy and decided to embrace it.

White nationalism is a parody of reason, of argument and, ultimately, of politics. One thing these Twitter Nazis all seem to have in common is the belief that the United States is in trouble, particularly in the conjoined spheres of government, politics, and media. Another thing they have in common is basic misunderstandings of fact. They think non-citizens get welfare and vote. They believe Russia is interfering in the election to help Hillary Clinton, but they also love Putin. These people have failed to understand a complex political system and the complicated history behind it, so they replace it with an idea anyone can grasp: America is white, and white is good. Anything bad for America must therefore be nonwhite.

That order of reasoning is important. It’s not that these people believe nonwhite is bad, even though that’s what their beliefs inevitably boil down to. They start from the bad, from observing some problem or social change that bothers them, and then they find a way to blame it on brown people. They are angry first and racist second.

I think that’s important, because I believe a lot of these people would not be Twitter Nazis if Rep. King had not encouraged them in that direction. They’d be gun nuts or homophobes or something. But King represents a failing district, where wages have gone down, old farming communities have fallen apart, and a young generation—the children of white and brown Americans alike—has left to find something better.

It’s ironic that King plays to white nationalists, because he’s representing a place that increasingly looks good only to people from third-world countries. I bet he doesn’t understand the reasons for that change much better than his angriest constituents. But he ought to set a better example.