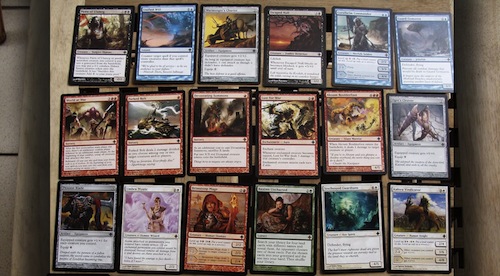 Cards from the game Magic: The Gathering. Cool, right?

Yesterday, a Gizmodo editor named Alyssa Bereznak posted this article about her Ok Cupid date with former Magic: The Gathering world champion Jon Finkel. I’m sure you have a lot of questions now, all of which it will embarrass me to answer:

I feel like I just took my pants off at the bus station.

Shame is a powerful thing, and as a lifelong nerd, I am familiar with the paradoxical impulse to hide what you personally think is cool.* My college girlfriends knew I played Magic,

but only after a few months and only if they could remember my telling them once and then never mentioning it again. The process of becoming an adult is, in part, the process of realizing that such behavior is unnecessary. Being cool seems life-determiningly important in the compressed social world of high school and, to a lesser extent, college. But adults socialize mostly with their friends and loved ones. Other people are strangers, and so cool becomes a quality of substantially less value.

An exception to this principle can be found on the dating website. Those who know me will note that my Ok Cupid profile makes me look substantially more cool than I actually am. My interests in punk rock, fighting and journalism are on prominent display, whereas the amount of time I spend playing World of Warcraft or trying to knock a beer bottle off a pole with a frisbee goes unmentioned. I like these things, but I know they are uncool, so I leave them out in order to better impress strangers.

Ms. Bererznak’s article points out the flaw in this strategy. Her contention is that Finkel should have included his world-champion Magic career in his profile, presumably so that she could not go on a date with him. She was repelled when she found out about it, and she implies that Finkel’s failure to mention it until the first date is tantamount to deception. “Just like you’re obligated to mention you’re divorced or have a kid in your online profile, shouldn’t someone also be required to disclose any indisputably geeky world championship titles?” she writes. At first glance, this seems like a situation where what would be good for Bereznak would not be good for Finkel, since it would prevent him from going on some dates. In fact, though, it’s a great strategy for Finkel, since it would have prevented him from going on a date with Alyssa Bereznak.

Bereznak is not world champion of anything, except maybe being called a bitch on the internet. I’m going to put aside normative assessments of her personality and focus on a fact, here, which is that she considered Finkel’s achievement a fault. Regardless of whether that’s justified, it points to a fundamental incompatibility between her and him. He is committed to Magic: The Gathering, and she is committed to a particular idea of cool.

I personally think her idea of cool is childish, but that’s beside the point. Finkel likes a fantasy world based on Dungeons & Dragons and Bereznak likes a fantasy world based on Sex and the City, and never the twain shall meet. Or rather, never the twain should have met. Jon Finkel’s Ok Cupid profile should say that he likes Magic: The Gathering. That way, he’ll stop wasting his time with cool people like Bereznak.

Another Jon I knew in New York used to remark that “I just want to meet a woman who’s into stuff.” He was a cool guy, in the sense that he was really smart and about to become a doctor and had a lot of weird opinions. He was not cool in the sense that Bereznak wouldn’t like him—in that he genuinely cared about particular things most people ignored, in that he was into stuff. As Bereznak’s early disclaimers remind us—”I came home drunk and made an OKCupid profile,” “every time I signed on, I was hit by a barrage of creepy messages”—a large portion of being cool is rejecting stuff, even when it’s stuff that you yourself are doing. It’s the absence of a Magic: The Gathering world championship, the absence of a date with all those guys who creeped you out by responding to your internet personals ad. It’s the absence of experience. Maybe that’s why it’s so popular with children.