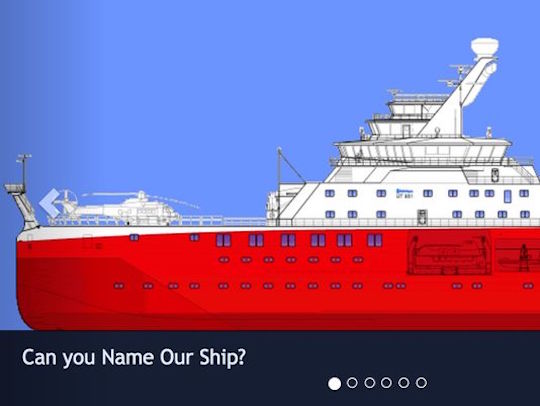 Yes, but my ideas will be dimly remembered Anchorman jokes.

The UK National Environmental Research Council’s has closed its online poll to choose a name for its new polar research vessel, and the winner is Boaty McBoatface. That name beat out Shackleton, Endeavor, and David Attenborough by a landslide, because it’s a hilarious joke. See, it’s a boat, so the name “Boaty” is fatuous. And “Mc” is a common component of names, while “-face” is not and therefore a comically inept/lazy construction. Boaty McBoatface us the “insert witty comment here” of gag names: it never gets old, no matter how many times you see it. That’s why this blog is called “Bloggy McBlogface” now, and when I put in for a table at brunch I tell them my name is “Diney McDinerton,” and I call my car “Carface O’Kelly”—just to give everyone a good, hearty laugh. Today is Friday, and I’m not worried about the effect of democracy on ship-naming so much as on joke construction. Won’t you despise the vulgarity of the mob with me?

First, the good new: NERC will not be naming its vessel Boaty McBoatface. They will give it a name that befits its involvement in endeavors that take actual thought, to be conducted by scientists who have never  filled out Harry Potter memes. The bad news it that in so doing, the British government has ignored the will of the people and reneged on the implicit promise of democracy. That’s one way of looking at it, anyway, and the Atlantic’s Uri Friedman can see it if he keeps his tongue in his cheek. But isn’t this exchange of promise and disappointment how real democracy works, too?

Abraham Lincoln’s vision of a government “of the people, by the people, and for the people” may be rousing, [authors Achen and Bartels] write, but it’s not realistic. Most voters have neither the time nor inclination to pay close attention to politics…Since voters aren’t fixated on policy, elected representatives and other top government officials—the rare members of society who are seriously and consistently liberal, conservative, or otherwise ideological—are left “mostly free to pursue their own notions of the public good or to respond to party and interest group pressures” in formulating policies.

Democracy is an illusion. We can vote for representatives, but we don’t apply meaningful pressure in any way that forces them to enact policy according to the will of the majority. As Mao once said, power flows from the barrel of a gun. Lewis and Clark County Sheriff’s Deputy Phillip Jay Clark got short-term more and long-term less powerful in December, when he arrived drunk to his neighbors’ bonfire and pulled his gun on an Asian-American man he accused of being “an ISIS.” He was subsequently removed from the force, and yesterday he received an 18-month deferred sentence for criminal endangerment. You know what that means: an occasion to reprint this the Missoulian’s most journalistic retelling of a joke.

The documents say [the victim] told the investigator Clark hit him in the ribs, then asked the victim to name the capital of Thailand, responded “Bangkok” and hit him in the groin before the man could respond.

One gets the feeling PJ Clark has been running that gag since he was a teenager, and becoming a cop just made it funnier. See, he’s banging your cock. It’s funny because he has a loaded gun to your chest.

It’s hard to know who’s an ISIS, though, in this day and age. Probably, any off-white dude with a wispy beard is a person of interest, just waiting to send your neighbor’s bonfire up in even more flames. Terrorists are like millennials: a terrible threat to this country, and we don’t know who they are. Over at the Awl, Jeff Ihaza points out that the picture of millennials we see in the national press comes from a group of successful media professionals painting portraits of their own children. Here’s a fun fact:

In 2000, Neil Howe and William Strauss published the seminal work, Millennials Rising: The Next Great Generation, coining the term in its pages. The two D.C. policy wonks pored over statistics, pop-culture anecdotes, and surveys of teachers and high-school seniors from Fairfax County, Virginia—the first county in the U.S.with a median income of more than $100,000, and whose African-American population sat just under ten percent. Using those data, Howe and Strauss assigned the age group seven core traits: special, sheltered, confident, team-oriented, conventional, pressured, and achieving. Today, those words are used to inform and direct the billions of dollars used to target the demographic.

How many trend pieces describing millennials actually just describe rich kids? To what degree is “hipster” culture a synonym for white culture? If I had to pick one, I’d say MFA.

Maybe the millennials we see on social media and in comments sections aren’t actually millennials, though. They’re probably bots. You may remember Microsoft’s experiment with giving one of its deep AIs a Twitter account, causing it to become a Hitler-loving sex robot in 24 hours. Speculative fiction writer Hugh Hancock has some scary things to say about the possibility of bot swarms: versions of the Tay Chatbot with social media accounts, programmed to be just plausibly human enough to, say, attack journalists on Twitter or upvote posts on Reddit. Real people operating multiple phony accounts—sock puppets, in dork parlance—usually don’t take the time to create things like long posting histories for their alter egos. But one Tay-quality AI running 500 Twitter accounts could generate four posts for each of them every day for two years and not get bored. It just waits for you to activate them. Then, boom: Boaty McBoatface wins the online poll, or 500 “people” claim to identify factual inaccuracies in every story Matt Yglesias writes. The implications for small-town politics alone are staggering.

The economy is slowing in Hebei Province, and Chinese construction workers are pissed. Props to Stubble for the link. If you prefer the sonic equivalent of a bulldozer fight, find something with a subwoofer and play this newest jam from Action Bronson.

Rap keeps getting slower, and I keep staying the same age.