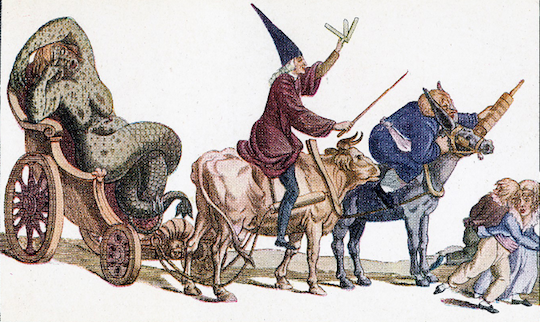 Behold the problem of others: as population increases arithmetically, the ratio of self to others worsens geometrically. The ideal ratio is 1 to 3: one other, plus a second person to help you overrule the first. The problem of others is not that, in the 21st century, the ratio has gotten as bad as 1 to 7 billion. It’s that none of the other seven billion people benefits from it, either, since each perceives the ratio of others to self as 7 billion to one. The problem of others is everywhere. For example, it’s at Disneyland with the measles. Today is Friday, and 350,000 new people will be born by the time you get out of work. Won’t you confront the problem with me?

First, the good news: we could probably ameliorate the problem of others by turning off the internet. The internet is how enough others got together to convince themselves vaccines are poisonous, and they brought back an old-timey disease. The problem of others has multiplied the kook population enough to support a cottage industry in out-of-production microbes. Such a small percentage of the population wasn’t enough to get a colony going during the 19th century, when the Anti-Vaccination Society of America was founded.1 Do yourself a favor and check out some of their anti-vaccination correspondence. It includes the Anti-Compulsory Vaccination Hymn—judging from the sheet music, a fiendishly difficult piece of music. You’re not going to work in “anti-compulsory” by quarter notes.

Meanwhile, hundreds of Britons write to inform Richard Dawkins that he is gay:

In defense of the letter-writers, the video Richard Dawkins made of himself laughing at haters is seven and a half minutes long.

Still, shoot the messenger but read the message. Why do so many otherwise reasonable people doubt science? As this internet-famous National Geographic article explains, our brains remember anecdote and experience more readily than abstract concepts. Even graduate students in the sciences hesitate before they remember that Earth goes around the sun. That’s how reasonable people doubt science, but it doesn’t really explain why, National Geographic. I can’t stay mad at a themed list of scientific findings, though. For example, here’s Dan Kahan of Yale:

Americans fall into two basic camps… Those with a more “egalitarian” and “communitarian” mind-set are generally suspicious of industry and apt to think it’s up to something dangerous that calls for government regulation; they’re likely to see the risks of climate change. In contrast, people with a “hierarchical” and “individualistic” mind-set respect leaders of industry and don’t like government interfering in their affairs…

You tell me the kids who loved obeying in high school aren’t Republicans now. Ha—I tricked your brain with anecdote or experience, when really you should search for a study with keywords “conservative” and “dorks.”

My father’s first published novel was “Bondage Babes,” released by Greenleaf under the name Alan Marshall in 1968. His pay was $600. The plot was a clever conceit. Someone had murdered a model for a bondage shoot, and the model’s sister was investigating the crime by posing as a model herself, which allowed for soft-core descriptions of restrained women.

You know what else you can have for free? Prince Buster:

The problem of others actually rules when people upload things to the internet. We’re lucky to be alive on this island between Prince Buster and global resource war. It is getting kind of crowded, though.