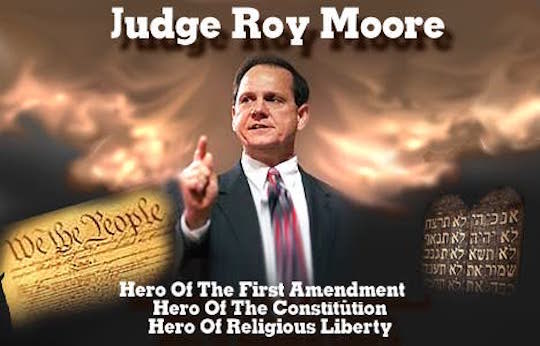 Last month, US District Court Judge Callie VS Granade declared Alabama’s ban on same-sex marriage unconstitutional. The state was supposed to start issuing licenses to gay couples—known regionally as “Ted and Earl”—this morning, but last night Alabama Supreme Court Chief Justice Roy S. Moore ordered probate judges not to do it. “Effective immediately,” he decreed, “no probate judge of the State of Alabama nor any agent or employee of any Alabama probate judge shall issue or recognize a marriage license that is inconsistent” with Alabama’s constitution—which includes a defense of marriage amendment that passed in 2006 with 80% of the vote. Now seems like a good time to point out that Judge Moore’s position is popularly elected.

You might remember Moore from 2003, when he defied a federal order to remove from the Alabama Judicial Building a monument to the Ten Commandments that subsequently became known as “Roy’s rock.” A state judicial panel removed him from the office of Chief Justice over that flap, but he was re-elected in 2012, saying—and I quote—“It’s clear the people have voted to return me to the office of Chief Justice.”

Washington’s Second Inaugural it weren’t, but the point is, Moore knows on which side his bread is buttered: the side of God. In Alabama, that’s the side aligned with the popular vote and against the federal government.

You might remember Alabama from 1963, when Governor George Wallace stood in the door of the state university in an attempt to block federally-mandated integration. It did not work. and history generally remembers Alabama segregationists as wrong despite their majority in the popular vote.

If you’re a real fan, though, you remember Alabama from its early work—for example seceding from the Union in 1861, also in protest against federal overreach. In that case, the massed federal power of the United States installed Abraham Lincoln as President, unconstitutionally overruling Alabamans’ authority to decide who was in charge of them. Answer: nobody, except the aforementioned God, maybe.

Anyway, there are three issues here. One is how well the defense of marriage is actually going in Alabama today. At least one probate judge, torn between two superior members of separate judiciaries, has announced that he will issue no marriage licenses until the whole thing blows over. This seems like maybe a perversion of the Sanctity of Marriage Amendment, akin to knocking down the church because a goat got in there and stood on the altar.1

The second issue is nullification. Along with other southern states, Alabama has tried to overrule federal law before, and it has never worked. There’s little reason to believe that refusing gay marriage will work any better than refusing desegregation or the Tariff of 1828. As discredited theories of jurisprudence goes, you can’t get much more storied or consistently struck down than nullification. Yet it’s made a real comeback in the last decade, probably thanks to the rise of reactionary conservatism and the constitutional literalism of the Tea Party.

The third issue, while we’re learning some high school-grade US history, is the tension between the rule of the majority and the rights of the minority. It’s a consistent problem in America, where freedom means democratic self-rule and therefore, paradoxically, ruling others.

Eighty percent of Alabamans may find the possibility of gay people getting married repellant, but it’s not their business. Certain individual rights are beyond the reach of democracy—for example, the right to get married or attend the University of Alabama. These rights extend to everybody—even to people whose demographics are not large enough to win a popular vote.

A fundamental proposition of US government is that certain rights are not awarded democratically. They are possessed naturally. Of course the question of which rights are natural and which are legal is not easily decided. But you can’t decide by voting, because that process by definition only determines one kind of rights.

If you have yet to be persuaded by this argument, I direct your attention to Judge Roy Moore. Regardless of what he thinks personally about defying federal law, his political career has been based on winning popular acclaim by doing it. He’s been wrong before, and now he is probably wrong again. But who is numerous enough to tell him?