You and I both know we’re voting for Hillary Clinton in November. President Clinton II is the best we can expect. Despite a hostile Congress, she’ll oversee three more years of steady growth in stocks and home prices before a second Great Recession finally convinces the Republican Party to embrace armed secession. That’s the offer. If you don’t like it, you can vote for Donald Trump. The important thing is that we manage our expectations, not fool ourselves into thinking the 2016 election can change the course of the United States. Today is Friday, and things will never be as good as they were 15 years ago. Won’t you stop being a goddamn stupid baby with me?

First, the good news: Paul Krugman agrees with more than a half-dozen other left-leaning wonks that when UMass-Amherst professor Gerald Friedman calculated the effects of Bernie Sanders’s economic plan, he got it all wrong. The bad news is Friedman predicted employment “soaring all the way back to what it was in 2000,” to quote Krugman’s incredulous recap. Return to the employment levels of the year 2000! Why don’t we just make our sex robots fly us there in our personal time planes, President Asimov?

As Ryan Cooper points out at the The Week, it’s odd to see marquee economic analysts like Krugman and Austan Goolsbee debunking an obscure professor. Friedman is not associated with the Sanders campaign, yet Krugman has called on Bernie to denounce his figures. Perhaps more alarming 1 is that none of these denunciations says why Friedman is wrong. They don’t scoff at his methods but at his conclusions. Any plan that returns jobs and wages to their pre-recession levels is prima facie ridiculous. That tells you something about the state of Democratic thinking on the economy in 2016.

But why think about how to improve the lives of others when it’s all you can do to hold onto your own? Ben al-Fowlkes sent me this dispatch from nearby Ravalli County, Montana, where county commissioners presided over a gathering of hundreds to discuss whether to bar Syrian refugees. Just look at this photograph by Kurt Wilson. 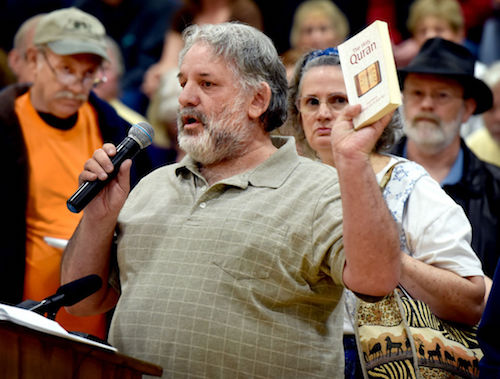 It contains four recognizable kinds of small-town asshole: the landlord who knows everything, the panicked church lady, the quiet old psycho, and the guy who seems all right at first. “The US may not be at war with Islam, but Islam is at war with the US,” Phil Liggins said, after specifying that the God of the Bible and the Allah of the Quran were not the same. Other attendees agreed that although there were no Syrian refugees in Ravalli County at this time, the federal government should not be allowed to resettle them there until we can be sure they aren’t terrorists. These concerns came after some of the evening’s few dissenting remarks:

Chris Love of Corvallis told the commission the federal government doesn’t determine where refugees go, and the independent agencies that do typically send them where they have family members or to places where there are plenty of jobs, which Ravalli County lacks.

Oops! Did somebody accidentally speak the truth in Ravalli County? That’s how you wake up Bigfoot. Meanwhile, on the internet, I am alarmed by this picture of Michele Houellebecq. 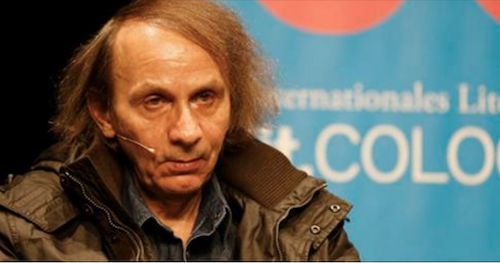 At least he’s still wearing his parka for interviews. This shot is from a discussion with Le Point in which he says Israel holds the moral high ground in its conflict with Palestine, pretty much arbitrarily. He blames the left for inciting antipathy toward Israel among French Muslims, who are concerned about Palestine but care little about crises involving members of their faith in other parts of the world. Did you read Houellebecq’s flawed and strangely good most recent novel, Submission? Karl Ove Knausgaard did, although he observes that he probably didn’t have to. “You may quite easily conduct a conversation with people about Houellebecq, even members of the literati, without anyone suspecting that you have never read a word he has written,” he says, and he’s right. You’d be missing out, though. Read The Elementary Particles this weekend. Just start it and see if you stop. While you’re at it, push play on this video and see if you can look away.