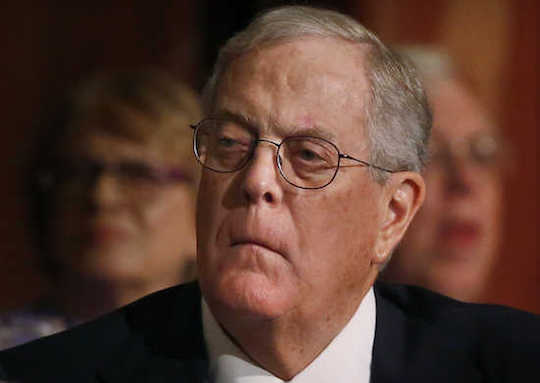 The biggest difference between [501(c)4’s] and any other organization that raises money for political purposes is that they do not have to disclose their contributions, or who gave them. That means they operate largely in the dark, out of the public eye. One example is Crossroads GPS, the social-welfare arm of the conservative super PAC American Crossroads. The Sunlight Foundation found that American Crossroads and Crossroads GPS spent a combined $174 million on the 2012 election, and that 70 percent of the contributions were from anonymous donors.

Yeah, but who pays for the Sunlight Foundation? The whole system is corrupt: the anonymous billionaires who spend more money than our actual political parties, and the people who say that might be bad. The only truly innocent people are the ones who have no idea what’s going on.

That’s why I’m spending $900 million this election cycle, and you should to. Normally I do not endorse Huffington Post or anything connected to the bafflingly successful Jimmy Kimmel, but the satirical conceit of this piece by Jonathan Bines is too good.

I have heard the excuses: “I’m too busy.” “Politics just doesn’t interest me.” “I don’t have $900 million.” The list goes on. But the truth is, if you believe in America, then there really is no excuse for not spending $900 million and joining the great American experiment that is our democracy.

Kombat Kids take note: satire works by conspicuously ignoring a truth that is also ignored in daily discourse, forcing the reader to synthesize it herself. We all see the glaring error in logic that comes with insisting $900 million in political spending is the same as speech. Bines just gives us the context in which to articulate it cleanly: the truth-shaped hole in the picture he paints.

Soon satire won’t matter, though, because everyone will be too dumb to understand it. Adjunct professors now teach the majority of college courses and make a median wage of $2,700 per course. That’s the princely sum of $10,800 a year if you teach two courses a semester—below the poverty line and far below the pay of tenure-track professors, who might make $60,000 for the same load. The SEIU, which has evidently been organizing adjuncts on the sneak, last week called for a minimum compensation of $15,000 per course. That would completely change the life of the adjunct. Hell, you might see me in a classroom again for fifteen grand. Okay, probably not, but it would be nice to have the option.

Really, I’ll do whatever for money. Want me to write bomb plans or a racist tract? Fine—you cut the check and I’ll type. Writers hustle, as evidenced by this application letter from Eudora Welty to the New Yorker, circa 1933. Quote:

As to what I might do for you— I have seen an untoward amount of picture galleries and 15¢ movies lately, and could review them with my old prosperous detachment, I think; in fact, I recently coined a general word for Matisse’s pictures after seeing his latest at the Marie Harriman: concubineapple. That shows you how my mind works—quick, and away from the point. I read simply voraciously, and can drum up an opinion afterwards.

She’s the best! Okay, Flannery O’Connor is the best, but Welty is probably funnier. You should read Why I Live at the P.O.. I’ll wait here until you come back.

It was good, right? Now obey me some more and listen to this:

Action Bronson is the Eudora Welty of rap. Mark it, dude.