END_OF_DOCUMENT_TOKEN_TO_BE_REPLACED

The commercial above was produced by Generation Opportunity, a Koch brothers-funded political activism group that encourages young people to “opt out” of Obamacare by not buying health insurance. First of all, it’s good to see the leprechaun from Leprechaun working again. Second, the “opt out” campaign is designed to sabotage the Affordable Care Act by disrupting state insurance exchanges. For insurers to offer lower premiums, they need to enroll large numbers of relatively healthy young people, who dilute the risk pool for everyone else. If large numbers of young Americans refuse to buy health insurance, the exchanges will falter, [ill-defined step two] and, finally, Obamacare will disappear. Unintended consequences after the jump.

END_OF_DOCUMENT_TOKEN_TO_BE_REPLACED 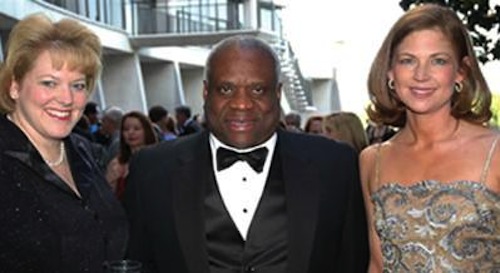 Supreme Court Justice Clarence Thomas, his wife Virginia, and someone with a neck

Come Tuesday, Clarence Thomas will have passed five years on the Supreme Court without asking a question or offering his opinion during oral arguments. That’s unusual. According to the New York Times, “in the 20 years that ended in 2008,*

the justices asked an average of 133 questions per hourlong argument, up from about 100 in the 15 years before that.” Antonin Scalia has been known to interrupt petitioners to read aloud from Garfield. Yet Thomas, described as “gregarious” in his personal life, has not spoken from the bench—except to read prepared statements of majority opinion—since 2006. In addition to pointing out the fundamental inadequacies of the nickname “Silent Clar,” such long reticence begs a question: why?

END_OF_DOCUMENT_TOKEN_TO_BE_REPLACED 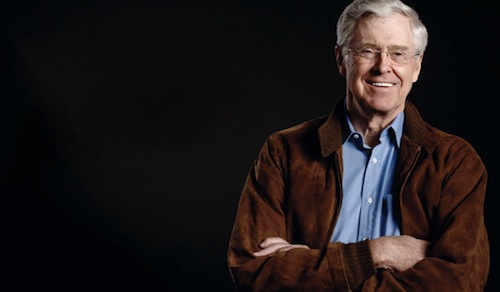 Charles Koch, photographed here with the things he does not own

Here are just two of the many fun quotes in Jane Meyer’s New Yorker article about David and Charles Koch, the billionaire brothers who founded Americans For Prosperity, support a network of conservative think tanks dedicated to libertarian causes, and have been instrumental in creating and sustaining the Tea Party movement:

They’re smart. This right-wing, redneck stuff works for them. They see this as a way to get things done without getting dirty themselves.

The problem with the whole libertarian movement is that it’s been all chiefs and no Indians. There haven’t been any actual people, like voters, who give a crap about it. So the problem for the Kochs has been trying to create a movement.

The first is from a previous advisor to the Kochs and one of the many sources in Meyer’s story that go unnamed. The second is from Bruce Bartlett, formerly of the National Center for Policy Analysis, a think tank the Kochs funded. If you lack the time or patience to read Meyer’s mind-blowing but also 10,000-word story on these men—whose combined income is exceeded in America only by Bill Gates and Warren Buffet—you should know two things. One, the Fifth Avenue apartment mentioned in the opening section now belongs to one of my former clients, and I used to tutor there twice a week. Two, you can get the gist of Meyer’s article by reading Frank Rich’s column from Sunday.