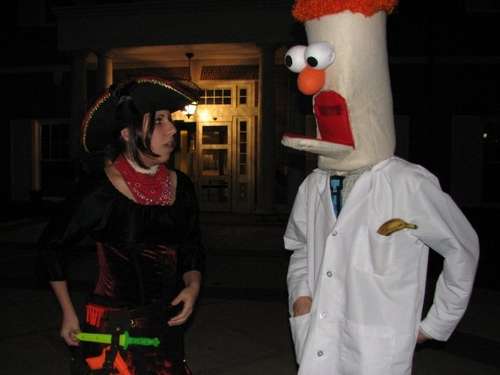 It’s Friday, but more importantly we stand on the cusp of Halloween weekend. I don’t know about you, but I like Halloween. It’s a holiday we can all celebrate comfortably. Halloween doesn’t come with the weirdo baggage of a Christmas or a Columbus Day; it’s a perfectly innocent time devoted to images of death, elision of individual identity and the sexualization of pirates. The best part of Halloween is, of course, the masquerade. For one night of the year and maybe the preceding Saturday, the social conventions that govern dress and age-appropriate behavior are lifted, and we confront the real freedom we possess. Here is carnival in the root sense of the word—a society governed not by mores but by appetites, mostly for Reese’s and Apple Pucker, but also for truth. Paradoxically, we become most ourselves when we put on a costume. This week’s link roundup is all about the truth that reveals itself only in the lie, the confrontation with the masquerade. Also midget tossing. Trick or treat, kids. Why don’t you reach into this sack without really knowing what’s in it?

First, the good news: Rick Perry is going as a populist again this year, although he’ll be disappointed that everyone at his party is dressed the same. Perry has officially boarded the GOP flat tax bandwagon and proposed a 20% rate for all income brackets. That’s conspicuously higher than Herman Cain’s Everything Is Nine plan, but Perry sweetens the pill by also offering a $12,500 deduction for every member of a household. I’m glad Rick Perry has invented another way to punish me for not having children, but I still have some concerns. For example, his plan eliminates the capital gains and estate taxes and lowers the marginal rate on the wealthiest earners by 20 points. If we consider it from the perspective of a county with no history or existing tax code, it’s a flat rate. If you accept the existence of 2011 America, it’s a massive tax cut for the wealthy and a hike for everybody else. The number of Republican presidential candidates betting that you cannot apply critical thinking to the term “flat tax” has officially risen to two. You know Romney’s thinking about it.

Meanwhile, a thousand miles south and two feet closer to the ground, Bill Klein has come out strong against dwarf tossing in the Daily Beast. Okay, he’s against dwarf tossing in Florida, but he’s making his case in the DB. I don’t want to minimize this aspect of the story, so I’ll come right out and say it: Klein is a dwarf. His claim that dwarf-tossing is a form of assault seems short-sighted, at first, given that the dwarves are getting tossed voluntarily. But then you read the arguments of the awesomely-named Ritch Workman, Florida state legislator and sponsor of the bill:

I’m on a quest to seek and destroy unnecessary burdens on the freedom and liberties of people. This is an example of Big Brother government. All that it does is prevent dwarfs from getting jobs they would be happy to get in this economy, or any economy. Why would we want to prevent people from getting gainful employment?

I don’t mean to belittle him, but the first unnecessary burden on the freedom and liberties of the people of Florida is the state law against dwarf tossing? What’s the second one? It seems possible that Workman just realizes dwarves are a very small portion of the electorate, and grandstanding against this law has the potential to garner lots of publicity with little losses. Maybe this view is childlike, but one hopes one’s elected officials would be bigger than that.

But we don’t need government to genetically foreshorten the limbs of liberty, anyway. In the aforementioned modern world, we have government-sized multinational corporations to do that. In a statement on Monday, Julian Assange said that a concerted financial blockade may force him to shut down WikiLeaks. You remember Wikileaks, right—the radical freedom-of-information organization that published embarrassing secret material about the United States government and Bank of America? The feds couldn’t do dick about that, because we have this stupid First Amendment. Bank of America, on the other hand, is bound by no such written conscience. Along with Visa, Mastercard, PayPal and Western Union, BoA simply stopped processing credit card and wire transfer donations to WikiLeaks, effectively making it impossible for the site to get funding. It’s not censorship or political persecution, because a government isn’t doing it. It’s just all the private organizations that control the flow of money cutting off that flow in order to silence criticism. Nothing to worry about here. I think Bank of America is great and we should let them do whatever they want. Please don’t freeze my assets.

This sure is a spooky time of year/history. It’s possible that Paul Krugman did not actually write this Onion editorial, but this sure is a spooky time for the economy, too. First of all, there should be a Pulitzer Price for Photoshop, and they should give it to The Onion—ideally by melting down Jennifer Egan’s statue, remolding it and giving it back to her for an afternoon before taking it away again. Second, I’m glad to know that The Onion’s writers grew up with the Crypt Keeper, too. Somewhere in a dark laboratory on a stormy night, Micky McKeon is laughing.

Somewhere in LA, a parking garage attendant is congratulating himself on a job well done. People have tried to get me to like The Black Keys before, but it didn’t work until yesterday. Yesterday is when I saw this: