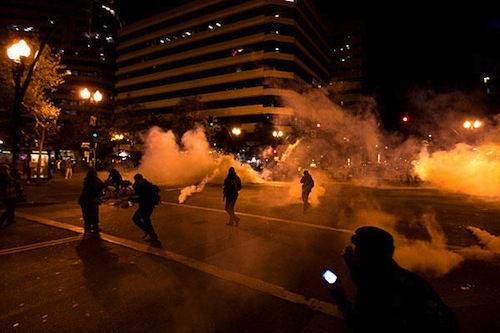 In Soviet Oakland, cloud of tear gas drifts through you.

As Occupy Wall Street approaches its seventh week, the demonstration in Zuccotti Park seems most significant as a testament to how well kids these days can run a protest. They’ve constructed an irrigation system, for Pete’s sake. Regardless of politics, anyone who has managed hippies must acknowledge OWS in Zuccotti Park as a breathtaking achievement in preventing people from freaking out. Less so in Oakland, where police turned tear gas on OWS protestors outside Frank Ogawa Plaza and cracked an Iraq war veteran’s skull. Scott Olsen is in critical condition with a wound on his forehead that looks like the rim of a tear gas canister, and people are pissed. It turns out that a demonstration of the will of the people is a different thing when dozens of guys with plastic shields show up to make it stop. And as USA Today somewhat gleefully notes, municipal authorities across the country are getting sick of this disobedience crap. So now comes the question of what OWS is going to do.

But first, a quote from someone whose mother should have told her never, ever to talk to a reporter:

I think what they’re doing is cool, but I like to sit in the park on nice days, and I haven’t been able to go since they’ve been there. Maybe it’s time they tried another approach.

That’s Karen Sanders of Atlanta. I’m going to call hers the neutral position, because I bet most of the country considers the tradition of mass resistance roughly as important as lunch in the park on a sunny day. Any hope that OWS is going to become a massive, Fawkes-masked restructuring of American culture is crazy talk. Whatever happens will happen within the existing system. That system can include more stun grenades, but it will not include the dissolution of the FIRE economy. In America, any plan that interferes with too many lunch breaks is destined to fail.

So despite its claim to be a movement, OWS remains a situation in the DeBordian sense. As you may have heard mentioned, the protests do not have an objective. They are an outpouring of dissatisfaction, a demonstration that this many people care so much about a particular thing. Scott Olsen cares enough about it to stare down a whole line of cops, and the cops care enough about it to shoot him in the face. The protestors in Zuccotti Park care enough to sleep outdoors in New York City for several weeks, and New York City cares enough to maybe arrest them all—enough to do that even though prosecuting them would be impossible.

In other words, OWS will eventually be corrected by force. That might be the purpose of civil disobedience: to force the government to exercise its monopoly on violence, and in so doing remind everyone that we are a nation of controllers and controlled. The difference between a democracy and other, crappier systems of government does not lie in our freedom from this dynamic. It lies in how quickly the offices can change.

Whatever comes of the OWS protests, they are a reminder that 99% of the population is still a significant voting bloc. Just as the Tea Party managed to turn dozens of normal Republicans into Constitution-stroking musket packers, Occupy Wall Street tells our elected officials that you could maybe say no to a bank and still be a Senator. In a little-r republican system like our own, a protest is the people’s poll. It is a way to say that at least this many people in these congressional districts care about this particular issue. Living in Zuccotti Park could be pointless and stupid, but five hours south they are talking about the Glass-Steagall Act.

I am a direct action man, and I have criticized OWS for not having a clear agenda before. I am suspicious of any plan that contains the phrase “raise awareness.” Perhaps the spectacle of earnest kids watering the plants in Zuccotti Park and cops lobbing grenades at injured veterans in Oakland will raise the awareness of our elected officials, though. Maybe they will see in OWS the potential for a few million votes to weigh against a few million dollars from Bank of America. Maybe they will see direct conflict between the citizens of the United States and the governments that are supposed to do their bidding, and they will partake in that great American tradition of reevaluating who their bosses are.