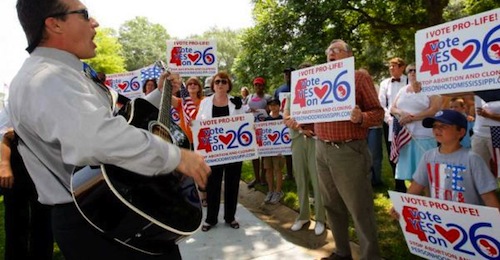 That is the furtive, inexperienced thrust of Mississippi’s Proposition 26, which would make all such eggs legal persons and, presumably, render any procedure that destroys them murder. Abortion, for example, would totally be murder. The morning-after pill would be murder. Getting pregnant because a homeless man raped you in a parking garage would not be murder, but doing coke after you got the test results back and having a miscarriage: murder. Certain types of IUDs that prevent fertilized eggs from attaching to the uterine wall would be murder. Treating an ectopic pregnancy would be murder, although allowing an ectopic pregnancy to come to term might also be murder. But the woman usually dies in that one, so justice is served.

Stem cell research? Those frozen embryos are people, so even though they are not in uteruses and lack the necessary biological material to grow, they are probably murder victims.

In fact, since an estimated two thirds of conventionally fertilized human eggs fail to implant, most sex is murder, or at least involuntary manslaughter. Because as anyone can plainly see, the picture at right is a person. Go ahead; show it to Coco the gorilla, and she will say “person” before demanding to pet that stupid cat again.

Here is my complaint about democracy as currently practiced in the United States: no reasonable person would identify those two cells as a human being. They just aren’t. I recognize that is a terrible argument from a logical standpoint, but you can easily gather support for what we viscerally know is true. For example, there are way, way more living human cells in an embalmed corpse. And the two cells at right have zero chance of survival outside another, fully-grown human being. They only have a 35% chance inside another grown person, for Chrissake. From the standpoint of participatory democracy, which seeks to decide what we as a society should do based on our given circumstances, that is not a person is a given.

Yet we have decided, in our present democracy, that we can vote on circumstances too. A large portion of the Mississippi electorate believes they can pass an amendment to the state constitution saying that right there is a picture of a person. Maybe they will. It will absolutely not change the world we live in one whit, however, any more than would an amendment saying God loves us and everything will be fine from now on.

Democracy as originally conceived—in Athens and in 18th-century Virginia, and probably among whichever nomadic mammoth-hunters did it without naming it—focuses on actions. It is a way to decide what we will do. Never in human history has it been considered a legitimate method for deciding what is true. When Newton set out to determine which principles govern motion, he did not conduct a poll of English gentlemen. What we call a thing is a different type of knowledge from physical laws, but these epistemological truths are independent of our democratic will, too. We could all vote that a cat is music, but it would not change what we recognize as true.

Proposition 26 is a vote for profound bad faith. It takes the given circumstance that most Mississippians don’t consider a microscopic cluster of four cells a person and declares it unreal. In this way, it seeks to undermine a foundational principle of American democracy: agreement upon the validity of reason. From a legal standpoint, it declares the common perception that you’re not a person until you’re born null and void. The difference between democracy and mob rule lies in respect for reason. Once we start voting on what’s true, there is no limit to what enough like-minded people can do. If that’s what we want, one wonders why we would need a government at all.