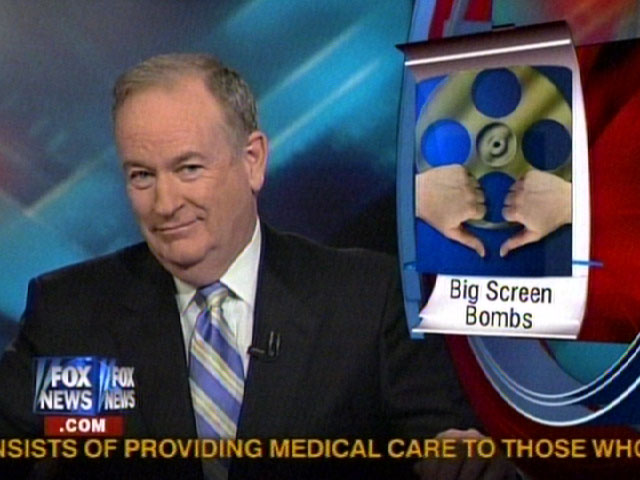 First they came for the lying gasbags, and I said nothing...

The big news in news that covers news coverage is, of course, the White House’s recent announcement that it’s no longer going to treat Fox News Channel as objective journalists. When the White House has its annual Objective Journalists Party, Fox News can come, but the White House will spend the whole time ignoring Fox News until it accidentally runs into them in the kitchen, at which point the White House will ask Fox News if they are having a good time and then say, “Yeah, well, great,” and walk away abruptly. Later the White House’s girlfriend will get drunk and say it’s bullshit that Fox came to the party at all. Still later, MSNBC will throw up while doing the limbo, which everyone had previously assumed was medically impossible.

Obviously, Fox News isn’t going to take this kind of Nazi-esque government repression lying down. They’re going to redouble their commitment to fair and balanced journalism, refuting the White House by example in their objective reporting and measured analysis of the events of the day, while leaving other news organizations to report on the White House’s criticism, since they can’t fairly report on themsel—nah, I’m just messing with you. They’re going to run a bunch of stories quoting executives from their own company and Fox News commentators, and attribute widespread criticism of the White House to unnamed sources via constructions like “some have said” and “top political strategists question.” I mean, come on—what’s the point of having a worldwide media outlet if you’re not going to use it to influence the perception of millions for your own ends? Sports?

You knew Fox News wasn’t going to be cool about this. Based on the sheer number of stories they’ve generated since October 12—when Anita Dunn actually accused them of not being objective, and the last time the White House had much to say on the subject—they seem to have decided to jump on this government-criticism-of-media thing with both feet. To hear them tell it, the White House “war” on Fox News is unprecedented. Never mind that Dunn’s criticism is supported by facts. Last year, former White House press secretary Scott McClellan told Chris Matthews that the Bush White House regularly gave talking points to Fox News, and that it often achieved “the desired results.” While Fox has issued a slough of reports on its own innocence, other news organizations seem to have assumed that everybody knows they’re biased. As usual, the story has gone from questioning whether what Anita Dunn said is true—it is—to speculating on what people will think of the story itself.

Popular opinion is that it’s good for Fox. Derek Thompson at the Atlantic believes that taking on the nation’s number-one cable news network will make the White House look petty, and Rupert Murdoch, via Breitbart.com, says it’s only increased Fox’s ratings. He was speaking to News Corp shareholders at the time and he offered no factual evidence to back up his claim, which is why you don’t use media executives as sources in stories about their own companies, but whatevs. As Farhad Manjoo points out, the fragmentation of media means that the facts don’t find us anymore; we find our own facts, and whether Fox News is an accurate source of information is less important than whether people want to treat them as such. The popular consensus is that a war of words between the White House and the network will embarrass Obama and solidify Fox News’s audience base.

The popular consensus is wrong and Farhad Manjoo is a bitch. Fox News’s audience base is as solid as it’s ever going to be, because they’ve been running nakedly biased coverage since their inception. Their conservative bona fides are established, and it’s not like criticism from the Obama administration is finally going to convince a few holdouts that Glenn Beck isn’t a secret liberal. At this point, the only way they could substantially expand or consolidate their base is if they broke a significant news story—the one thing they can’t do, since they’ve made a business model of shooting their own credibility. The opposition between Fox News and a Democratic White House is known far and wide. Rupert Murdoch isn’t going to make money advertising it.

The issue isn’t whether calling Fox News a Republican mouthpiece is going to make the White House look bad; it’s whether the highest-rated cable news network in America is propagating a warped image of world events in order to further a political agenda. The media environment Farhad Manjoo describes is fine from a business perspective, but it’s a disaster if you believe that people make important decisions based on factual information. America has a problem: one of its major news outlets consistently runs misleading reports. That’s fine, provided we stop pretending that they do something else. By making a national issue of Fox’s bias, the White House has taken the first step in a savvy domestic intervention: admitting we have a problem. The next step is for the news media to report on the story, rather than on how people might respond to its reporting of the story. As long as news keeps reporting on news of the news, the snake that is Fox will get fatter swallowing its own tail.