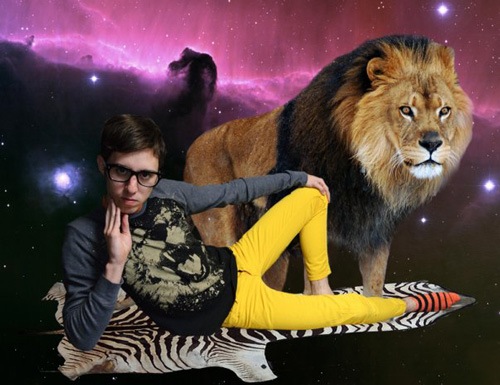 At this point, the iconography of hipsterism has become so esoteric as to just be iconography itself. If your primary focus is your clothes and you still look terrible, you're a hipster. Photo courtesy of latfh.com.

Salon provides us with an interesting ethical question/reminds us of its existence today, with this article about hip, educated young people who use food stamps to buy organic groceries. Much to the consternation of Mose, hipsters have been a perennial object of fascination here at Combat! blog, in part because they’re so difficult to pin down. In reporting the apparent uptick in hipster consumption of Supplemental Nutrition Assistance Program benefit cards, Jennifer Bleyer acknowledges the difficulty of proving that what she’s writing about is actually happening. “The increase in food stamp use among this demographic is hard to measure,” she admits, “as they represent a cross section of characteristics not specifically tracked by the Agriculture Department, which administers the program.” When writing about hipsters, one must continually examine the possibility that they do not exist. For Bleyer’s purposes, the hipster is a fairly identifiable, if vague, marketing demographic: twenty/thirtysomething, college-educated, and willing to pay money for organic tarragon. In this case, the money is yours.

Why is that infuriating? If you’re anything like me, your first impulse upon reading the article—hell, upon seeing the picture that comes with it—was to dismantle the welfare state immediately, and possibly the entire US government, on the off chance that it might benefit even one hipster. Such people deserve nothing, by definition. Which returns us to that sticky problem of hipster bashing and its gentler cousin, the trend piece: how are we defining “hipster?”

The hipsters in Bleyer’s article are named Magida and Mak; both of them are in their thirties, have college degrees, and are un- or underemployed apparently due to their refusal to get unhip jobs. Magida has an art degree and worked installing museum exhibitions until “arts funding dried up,” meaning that she’s essentially switched to a more efficient form of charity. Mak grew up in Westchester, attended the University of Chicago and, after he “toiled in publishing,” moved to Baltimore with no plans for a job, unless you consider part-time blogging a job.*

Like pornography, we know such people when we see them: they are hipsters. But how do we know?

Sure, the article tells us so, but we agree with it when it does. First of all, unlike actual poor people, Magida and Mak went to college. That they got degrees in art and (in Mak’s case probably) English was their mistake, and more likely indicative of privilege than of economic tragedy. Then there is their curious provenance; the article does not mention how Mak and Magida became interview subjects, and combines the acknowledgement that no real method exists to measure this phenomenon with unquestioned assertions like, “about half his friends in Baltimore are on food stamps.” Basically, Mak and Magida are Jennifer Breyer’s friends. Like the mysterious sources in a Times youth fashion article, they are the kind of people who—unlike regular poor people—know someone who writes for Salon.

All these details tell us something, but the literal selling point is the food. Mak and Magida spend their electronic food stamps on a comically stereotypical section of groceries—one that easily pegs them as members of a generation that is, as Breyer puts it, “as obsessed with food as previous generations were with music and sex.” First of all, no matter how much Mak is pining for braised rabbit with organic truffle oil, I doubt he would like it as much as even a mediocre handjob. Second of all, when he says “I’m kind of a foodie, and I’m not going to do the ‘living off ramen’ thing,” we immediately want to punch him in the mouth. Here is a man who actually regards his taste for gourmet food as A) an unchangeable aspect of his identity, so much that it is B) a legitimate reason to accept public assistance. And why shouldn’t he? Aren’t organic foods and local produce and free-range meat an ethical choice? Aren’t they expressions of Mak’s best self?

Here we encounter the busy intersection of organic eating, hipsterism and consumption, right outside Whole Foods. The first thing you will notice, when you make the switch to organic food, is that everything costs three times as much. Whether you believe that the higher price reflects value or not—the “real cost” argument—is beside the point; eating organic only works if you have extra money to spend on food, which makes it a province of the middle class.* 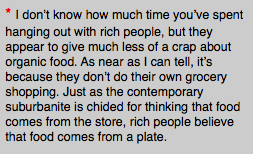 Not coincidentally, eating organically is also an indicator of status. Insisting that your beef be grass fed and your asparagus come from local farmers demonstrates that you are a conscientious person, and that your conscience is informed by a certain degree of education, taste and refinement. Unlike a lot of consumer signifiers—the Hummer, say, or the opera—organic eating has not yet acquired the taint of luxury. It’s the smart thing to do, the right thing to do, and it just happens to cost a lot more money. In other words, it’s hip.

This is why the hipster is so hard to define: because hipsterism is attached not to any particular signifiers, but to the concept of signifiers themselves. Mak’s argument that he needed to go on food stamps because “I’m kind of a foodie” captures the core belief of the hipster project: that the self is expressed by and inseparable from consumer choices—the way you dress, what music you listen to, the meals you eat. It’s why hipsters are so amorphous and yet so identifiable. Their belief that consumption is a form of personal expression is the hallmark of the contemporary American middle class.

Hipsters are the children of an inordinately moneyed and leisured generation of Americans. Of course, that makes it prima facie unacceptable that they should be getting food stamps, since a middle class person brought low by her inability to find work in a gallery is still middle class. Think about that statement for a moment, though: the hipsters in Jennifer Breyer’s article prove that you can qualify for food stamps and still not be poor, that you can need money and still be middle class. It says something about the nature of social stratification in America, not to mention something about the state of an economy in which so many young, college-educated white people have run out of money for food.

Or think about this: what kind of groceries do you want people to buy with food stamps? Would Mak and Magida stop being hipsters if they spent their $200 a month on Wonder Bread and Cool Whip? Would that somehow be better? Funny how a consumer choice can be enlightened or crass, and the only real difference seems to be whether we’re spending our own money.