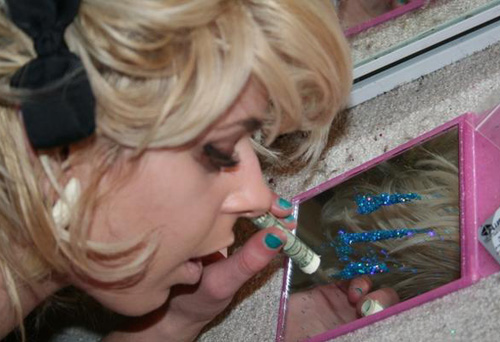 This is going to be so funny when I AAAAIIIIGHOHGOD! SWEET JESUS, I CAN'T...I MEAN I CAN'T (Silence. Cell phone ring.)

Yesterday at Combat! blog we got a little freaked out about how it’s entirely possible that everyone will get too stupid to operate America. Those of you horror movie fans who still crave tales of terrifying democracy will enjoy this article in the New York Times about Arlen Specter’s town hall meeting. It tells the story of Berks County Tea Party chairman Jon Stahl, a 65 year-old laid off from his job 18 months ago, who has since organized protests against taxes, the stimulus plan and health care reform. Presumably he is able to work full-time to stop government welfare because he gets social security benefits. The Times article points out that anti-reform protesters arrived several hours early to the meeting, creating enormous lines. I quote:

Proponents of the overhaul voiced the opposite fear, also citing larger issues at stake. “This isn’t just about health care,” said Carolyn Doric of Harrisburg, “it’s about political power and a means to regain political power.” Ms. Doric did not get into the meeting.

Normally, reading something like that would cause me to buy a high-powered rifle. But then I remembered the Millennials—that idealistic new generation that swept Barack Obama into power in the first place, and constitutes a new creative class of educated, informed, young professionals immune to conservative populism. Previous generations may have devolved into single-issue tax phobics, but the Millennials won’t be consumed by their need for disposable income. Right?

Actually, I did some research, and it turns out that is right. Nah—I’m just messing with you. The biggest generation since the Baby Boom is defined primarily by their enormous consumption spending. As Forbes puts it in this beautifully square trend piece about hipsters:

Beatniks, punks and even followers of grunge music in the early ’90s can be considered hipsters. But unlike similar groups of the past, the current generation of hipsters is a bit more generic in its self-labeling. Why? Because this scene is less focused on one idea, one purpose or one type of music. Instead, today’s hipster is defined by consumption.

Mose, I promise not to define the hipster any further, but that’s basically the conclusion we came to during Hipster Week. There are over 70 million Millennials, which makes them a significantly larger cadre than previous marketing buzzword Generation X, which clocks in at a mere 46 million sullen jerks. Those Garofalo-lovers spend only $125 billion a year, compared to the Millennials estimated buying power of $2 trillion. That’s an economic stimulus package and a health care system right there, but we’re spending it on fake western shirts. In the second quarter of 2008, when traditional retail giants The Gap, Abercrombie & Fitch and Express all lost business, Millennial-oriented Urban Outfitters reported a sales increase of 30 percent.

It’s not that the Milennials are rich, though. According to the DEMOS research group, typical earnings for young men with college degrees are down 19% since 1975. When it comes to jobs, income, and debt-to-savings ratios, twentysomethings now are worse off than their 1975 counterparts in all regards except access to education. Ready for the money shot? In 2006, 34% of adults age 18-34 did not have health insurance. That’s the highest percentage of any age group.

So we Millennials A) are the second-largest demographic in America, behind the voracious Baby Boomers and B) spend so much money that Forbes magazine advises clothiers to bend over backwards to pleasure us and C) are poor. It would appear that American consumerism has victimized the Millennials more thoroughly than any generation yet, and we have spent so much money on Animal Collective and Brooklyn Industries shirts that our meager incomes can barely sustain us.* And that’s great for the opponents of health insurance reform.

Normally, poor people are bad for the Republican Party. Under previous historical conditions, a generation of 25 year-olds with college degrees and professional training who still couldn’t afford to buy a house or save any money would radicalize pretty quick. But the Millennials aren’t poor because they’re jobless and idle. They’re working longer hours, at more demanding jobs, and spending their lower paychecks into oblivion on a dazzling array of consumer goods. They’re barely getting by and busy as hell doing it, which means that any slight reduction in income—caused by, say, a tax increase—could derail the whole train.

Never mind that tax money spent on health insurance reform would result in a net savings for everybody. When you’ve got student loan payments, credit card payments and rent to tally up each month, another hundred bucks off the paycheck is one political disaster you can easily understand. A third of the Millennials have decided to go without health care because they can’t afford it. Why wouldn’t the specter of higher taxes scare them away from getting it via the government? The retired, ignorant and conservative may be the one’s clogging town hall meetings this week. But it’s the working, educated and progressive who aren’t showing up.

* The other explanation is that there is an enormous income disparity within the Millennial generation, and the cadre includes a fantastically rich upper 5% that jacks up the average spending for everyone else. If this is the case, I invite you to join me as I roam the streets consuming human flesh.