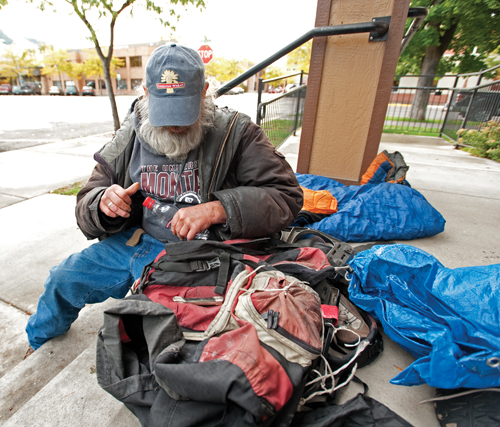 Glen Harley Stephens of Ryman Street. Photo by Cathrine Walters of the Indy

I moved into my once and future apartment yesterday, so I am no longer homeless. But the overall vagrancy rate in Missoula remains steady and maybe even climbs, despite such expedients as banning new soup kitchens and making it illegal to sit near businesses downtown. Last week in The Missoulian, the downtown association and various councilpeople complained that our new panhandling ordinance isn’t working. Instead of getting jobs or disappearing to Los Angeles, the bums are doing the same bum stuff, just in compliance with the new law. Even after we made it harder to be homeless, they stuck with it—almost as if they didn’t have a choice.

If you like irony, you’ll love the quotes in that Missoulian article. For example, there’s Linda McCarthy, executive president of the Missoula Downtown Association, whose assessment of the Missoula homeless problem is that “our business community is feeling the frustration because they’re not getting the response they need.”

It is a terrible indictment of our community that we have not given these struggling business owners the help they need to clear out bums. And the law we passed to do it has been a fiasco, as Worden’s owner Tim France observes:

The ordinance really hasn’t helped, and I’m not so sure it didn’t re-educate these guys. They are more intractable, it seems. They’re clear about knowing where they can sit, and I’ve watched them sit for hours and hours and hours, even after multiple contacts by law enforcement.

It’s a horrifying situation: you pass a law prohibiting a bunch of things that homeless people do, and they just obey it and go on being homeless. First of all, I would like to take a moment to criticize Worden’s, which I recently discovered does not carry The New Yorker but does carry a magazine called Varmint. Second, and maybe even more importantly, Missoula has a homeless problem that punishment won’t correct.

I think everyone can agree on the first part of that claim. For a town of its size, Missoula has a striking number of transients, particularly in summer. A lot of them are travelers of the young and culturally capitalized variety. Those people are irritating, particularly when they beg for change and get puppies, but they are also both geographically and economically mobile. They are part of Missoula’s homeless problem, but A) they have chosen a kind of modern tramp lifestyle that they don’t necessarily want to get out of, and B) come fall they generally solve themselves.

The other part of Missoula’s homeless problem—the part that lives in the dog park, plus the part that stumbles drunkenly into the street at 9am, plus the part that is crazy and unmedicated—is less tractable. They do not leave town when it gets cold. Anecdotal evidence suggests that their numbers are growing. These people are not homeless by choice, and we are not going to punish them out of it.

But punishment seems to be the only strategy Missoula wants to consider. The city keeps cleaning out the encampments under the Reserve Street bridge, throwing away the tents and sleeping bags but doing nothing with the people. The city council began drafting its anti-panhandling ordinance in the same month that it adopted a citywide ban on new soup kitchens and used it to retroactively zone one out of expanding.

In the simplest terms, the city has passed laws preventing homeless people from asking for help and preventing other people from offering it. And yet everyone agrees that something must be done. Invariably, that something is deterrence or punishment, even when, ironically, punishment converges with provision of services. I quote The Missoulian:

[Councilwoman] Emily Bentley…asked why jail time wasn’t already on the books. To that question, attorney Dan Cederberg said the city in 2009 considered adding jail time to the original ordinance but shied away for two reasons, including a lack of political will and the costs involved in doing so. “If you put somebody in jail on a city ordinance violation, then the city is liable for the jail time,” he said. “There are often other costs associated with that, like medical treatment.”

One way or the other, the homeless are our problem. We can make begging illegal, but the beggars won’t disappear. Besides the obvious moral failure, Missoula has done a spectacularly poor job in addressing this problem logistically. We have made it illegal for homeless people to ask for change, and we have fought the charities that try to help them. But one way or the other, we are going to have to deal with the bums.