The Montana Department of Revenue has threatened to fine Ravalli County $37,000 if it does not file delinquent property tax reports soon. The good news is that the interim heads of the county treasury, Clerk and Recorder Regina Plettenberg and the pleasingly-named deputy Dan Whitesitt, found $800,000 worth of undeposited checks dating back to November. Valerie Stamey, the treasurer who claimed to have uncovered a criminal conspiracy among county commissioners when they accused her of doing nothing since she was appointed, turns out to have done pretty much nothing since she was appointed.

She did, however, deliver a 90-minute address last week to the South Valley Pachyderm Club, the self-described “educational arm of the Republican Party.” Stamey began her remarks with a recitation of the Lord’s Prayer, an arbitrary screen capture of which you can examine below: 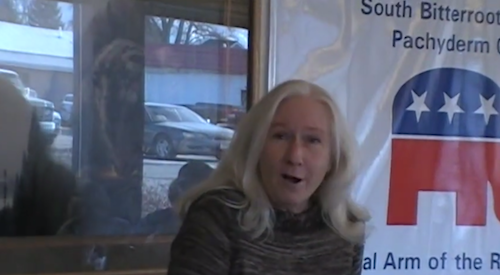 If that is not the face of unvarnished honesty, I don’t know what is. It’s the same expression Rodney Dangerfield makes before he scandalizes a society woman. It is unfair, of course, to think that we can know the truth of Stamey’s claims by looking at her face. When she says that she found evidence of years of illegal tax liens and missing receipts in the treasurer’s office, we should consider what she says independently of how she says it.

It’s kind of hard, though, when she says stuff like this:

“I have 15 copies of this information distributed in a variety of places and hands throughout this county. If God determines it’s my time to go home and get out of this crazy mess, it won’t stop.”

Perhaps I misinterpret her, but it seems like Stamey is saying God might tell her to flee the state. She did kind of already do that in South Carolina. Or she meant “God determines it’s my time to go home” as a reference to death—that would be bad. I want Valerie Stamey to live. Specifically, I want her to live and explain to the general public what the hell she is talking about.

As one audience member pointed out near the end of the Pachyderm speech, it is odd that Stamey refused to explain her allegations to the Ravalli County Commission after she initially made them, but was willing to present her case to a local Republican organization a week later. It does fit, however, with the narrative that Stamey was appointed for her loyalty to the local Tea Party.

Van P. Keele’s letter is pure conjecture, but the political explanation suggests how a woman with no managerial accounting experience got appointed treasurer over a 10-year county tax lead. It might also explain why the conspiracy she uncovered happens to involve the two commissioners who didn’t support her appointment.

The problem is we just don’t know. The news-consuming public is forced to consider two possible scenarios:

When you lay it out that way, the answer seems obvious. The woman with no accounting experience did not discover a years-long pattern of malfeasance that no one else could see; she just misunderstood the books. Scenario (2) suggests that Stamey was perhaps the worst political appointment in Ravalli history, that the commissioners who chose her were remiss in their duties, and—editorial content here—single-party government might not be so good for the county after all.

But oh lord, I want scenario (1) to be true. There’s no reason why Stamey can’t be hilariously incompetent and have stumbled onto a criminal conspiracy on the county commission. It’s just very, very unlikely. The beauty of the Ravalli County Treasury story is that Stamey insists on letting us keep hope alive.

Every new piece of information reinforces the narrative in which Stamey simply does not know how to run a treasury. Yesterday’s discovery that $800 grand in undeposited checks were just lying around her office certainly supports that. But Stamey won’t admit it. She keeps doubling down on her conspiracy narrative, probably digging a deeper hole for herself but maybe, just maybe, giving us the thrilling scandal we all want.

According to Ravalli County Sheriff Chris Hoffman, the FBI has contacted the county about a possible investigation. The truth is out there, somewhere, and one way or another we are going to find it. I don’t know about you, but I’m hoping it takes a really long time.