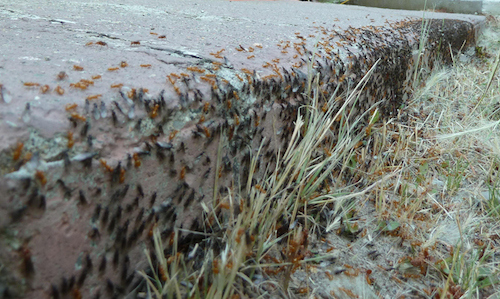 It’s the little things in life that make a difference: microbes, for example, or an extra line of code in Target’s credit card security, or those ants that probably live in your DVD player. In art, too, as in nature/the DVD player, the nuances are often more important than the long lines. Today is Friday, and the difference between buttermilk and cream is no more than a few drops of lemon juice. Won’t you curdle with me?

As I’m sure you already know, Wednesday was Tom Selleck’s birthday. I was doing a little Googling in observation, and I stumbled upon his biography at the NRA website. Did you know that Selleck is on the board of the National Rifle Assocation? Did you know that, as a member of the California National Guard, he was activated during the Watts riots? That’s the third sentence of his bio, right after the part about him being in several movies and TV shows. Somebody at the NRA understands psychology. Be sure you read all the way to the end so you can encounter this quote:

The twentieth century has been a collectivist century. Most of our solutions to social problems—even the term ‘social problems’—are collectivist. We’ve had this global experiment, and we’re starting to see the end of the chain letter … It’s just time to reassess things and say that maybe this idea of ‘the common good’ has to be translated through the individual.

Magnum PI may be done with altruism, but certain fictional characters remain as icons of everybody feeling good all the time. This guy, for example: 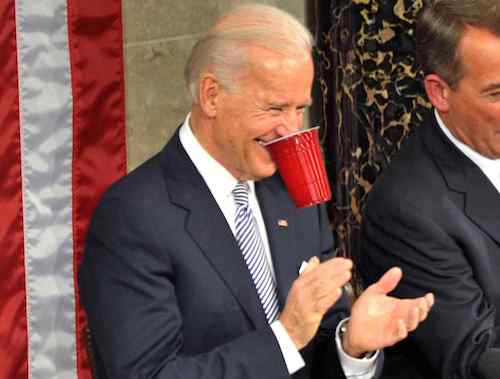 In the annals of naturalism, Biden Clenches Plastic Beer Cup in Teeth to Free Hands For Clapping is perhaps The Onion’s greatest achievement. It is, how you say, a slice of life. Props to Ben al-Fowlkes for the link.

I should make it clear here that The Onion is not real, and also I get an alarming portion of my news from it. At least I’m not watching Fox News, which, as Slate suggests, makes me dumber. You know what really makes people dumber? Insistently conflating correlation with causation. It is true that Fairleigh Dickinson University canvassers found that people who watch Fox News scored worse on a current events quiz than people who watched no news at all, but that doesn’t mean Fox is making them dumber. It only means that Fox is successfully targeting the dumb people market. Also, viewers of The Daily Show scored the second highest of any cadre, just below NPR listeners. Print news sources were not considered.

Not that the world of print media is so perfectly informed. The New York Times’ David Carr ventures into the world of dramatic irony when he asks whether web journalism is a bubble or a lasting business. Even his editor begs him not to tell people about he internet, but he does anyway. Quote:

What I ended up talking about in a column published online Sunday night was a generation of writers and editors who are building a discrete ecosystem of news that will host the next big brand names. It set off a variety of responses from “duh,” to ardent affirmations, but the question remained: Is this a bubble or a business on the make? Opinions are unlimited but print space is finite, so there is probably some value in going deeper into the notebook on this one.

Ah, yes—a variety of responses from derisive agreement to ardent agreement. Carr may be the Bil Keane of journalism in this moment, but he is right when he observes that online journalism is much, much more focused on aggregation than its print counterparts. We all love listicles, but someone has to generate original content or we’re in trouble.

But internet not care. Internet want pictures of golden retriever who loves kitten. There are no acts of congress or even human beings picture, but I’m pretty sure that’s pornography. Look at how the kitten sleeps under his ear, though. His soft ear! I am kind of crying right now. Also, the structure of that headline has emerged as the dominant form in viral internet content. What happens next will impoverish your media.

Any form that becomes too distinct makes itself vulnerable to parody. Consider this genius spoof of the Red Hot Chili Peppers, “Abracadabralifornia”:

Saying “Alabama slammer!” in a speech impediment voice over and over again is pretty much 50% of the Chili Peppers’ oeuvre. The other half is getting famous in the 90s, when people were generally more credulous, so don’t try to recreate it. Where you come from is gone. Where you thought you were going to weren’t never there. And where you are ain’t no good unless you can get away from it.