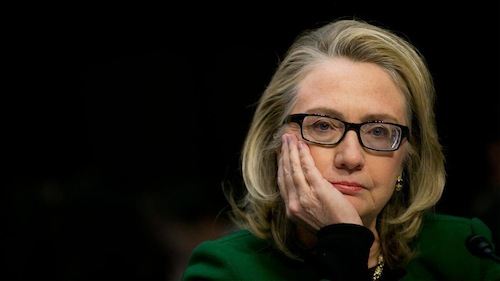 “In some ways,” Rand Paul says in this article from the Times, “the older Democrats have become more staid and status-quo-like than some of us Republicans.” Thus begins the most tenuous political strategy in recent memory: Republicans’ plan to characterize Democrats as the party of the old. Former Romney strategist Stuart Stevens told reporters last month that electing a Democrat in 2016 would be like going back in time. And Mitch McConnell described the likely Democratic field as like an episode of The Golden Girls, presumably in that he masturbates to it.

Yet painting a woman as old is somehow more fraught than doing the same thing to a man. Maybe it’s because American society is painfully conscious of its unfair standards for women in beauty and age, even as it continues to impose them. Consider Rush Limbaugh, who asked whether Americans really “want to vote for somebody, a woman, and actually watch a woman get older before their eyes on a daily basis?”

Best of luck to Limbaugh in his ongoing fourth marriage, by the way. The absurdity of his comments is less a testament to overarching age/gender bias within the Republican Party than to its powerful hatred for Clinton, which encourages them to take up whatever weapon is handy. In this case, the weapon seems likely to backfire.

Coming from Republicans, age-baiting seems both mean-spirited and unconvincing. After vigorously opposing gay marriage, railing against Pell grants, and calling for Social Security reform while swearing to protect it for people who are currently senior citizens, the GOP is intuitively the party of the old. Whether it comports with the facts or not, the image of Republicans as uniformly aged white men looms large in the popular imagination. No amount of messaging strategy between now and 2016 is going to change a public image that has been in place since the Vietnam War.

That’s a shame, because the contemporary Republican Party is looking at a golden opportunity to win back the youth with policy. Rand Paul touched on this possibility in his observation that young voters resent the surveillance state and aren’t looking for candidates who promise to “lock them up for marijuana.” Young people tend to be more socially liberal than the Republican Party, but that’s partly because they are generally libertarian. My assessment of Rand Paul vacillates between “useless theorist” and “jackanapes,” except when he starts talking about drug law or the Fourth Amendment. Then—suddenly, troublingly—we agree.

Besides being naturally libertarian, young people also tend to have less money. If you’re under 50, wage growth has been essentially zero for the entirety of your working life. Don’t worry—the stock market is doing great. The massive shift in US moneymaking away from people who work and toward those who invest is an issue that neither party has been willing to address, despite its obvious potential in votes won.

Concentration of wealth means that fewer people are wealthy, even as more people must work. That’s probably why the GOP has wrung as much success as it has from the single issue of lower taxes, even as it alienates whole demographics with its positions on gay rights and immigration. Imagine the advantage it could derive from meaningful efforts to address wage stagnation and barriers to homeownership among people aged 18 to 35. Imagine how young people would react to any party that could demonstrably prune the finance industry ande make it easier to get ahead by working for a living.

For the GOP to do that would require, in many ways, seismic shifts in bedrock policies. I submit that those policies are fundamentally Republican rather than conservative, however, and changing them would not be much harder than changing the perception that the GOP is the party of the old. Trying to rectify that public opinion without meaningful policy change is like trying to roll back time by turning the hands of a clock. Hillary Clinton may look like your grandma, but Christie and Rubio talk like her. The dirty secret of the 2016 election is that there are two parties of the old.