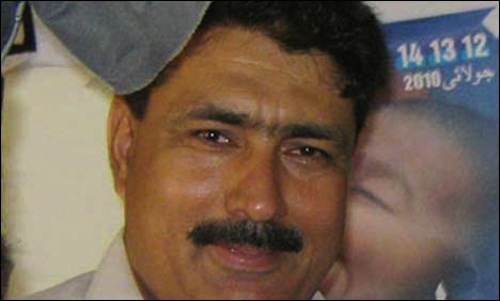 Dr. Shakil Afridi, with weird objects near his head

Remember when Pakistan was like, “Bro, we have no idea where Osama Bin Laden is. That guy’s a dick!” and then it turned out he was in Pakistani Arlington, Virginia? And remember when we shot him in the eye and dumped his body in the ocean, and Pakistan was like “that’s what we wanted to do! But it is absolutely unacceptable that you came into our house.” Far be it from me to criticize a military junta while it makes the delicate transition to theocracy, but I worry that Pakistan might not be our real friend. Evidence: This morning, a tribal court in Khyber convicted Shakil Afridi—the Pakistani doctor who helped the CIA locate Bin Laden—of high treason, sentencing him to 33 years in prison.

It also fined him $3,500, which amortizes out to like eight dollars a month. That’s kind of funny until you consider that maybe the one man in Pakistan who worked in good faith with the CIA will now spend the rest of his life in jail, and American intelligence will have to work with the second friendliest man in Pakistan, President Asif Ali Zardari. President Asif Ali Zardari is a jerk. Earlier this week, he flew to Chicago in the hope that President Obama had forgotten about his refusal to reopen supply routes to Afghanistan. That did not work. Our valuable ally continues to imprison our business contacts and refuse to let us drive army trucks through their country toward our other valuable ally, who also hates us, and US foreign policy continues to resemble the unattended birthday party of a rich fat kid.

Now seems like a good time to assess what we have gotten for our money in the War on Terror. On the minus side, we have the 6,000 people killed on September 11, 2001, plus the 1,890 US casualties in Afghanistan since then. So far we have spent $530 billion on exploding and then reassembling that country, and what have we gotten in return? We definitely shot Osama Bin Laden in the face. Some, but not all, of the Taliban have been driven out of Afghanistan, and we are tactically obliged to pretend that we haven’t seen the neighbors throwing garbage over the fence.

It’s almost as if declaring war on a concept and launching two decade-long invasions and restructuring the federal government was a stupid way to respond to a single terrorist attack. September 11 was very bad, as anyone who sort of remembers watching it on TV will tell you. I submit, however, that the last ten years of American policy in the Middle East have been much worse—and not just in some namby-pamby “human decency” way, either. I mean in the way where we spend billions of dollars, humiliate ourselves before the bush-league theocrats of semifunctional states, and amputate a generation of military volunteers.

Maybe it was worth it to shoot that Osama Bin Laden. He’s dead and the United States continues to have monster truck rallies and Kim Kardashian, so maybe technically we won. Maybe, though, we totally lost. Maybe Osama Bin Laden punked us, and the damage he inflicted in one morning was multiplied by the next ten years of stubborn overreaction. Maybe it is a coincidence that America’s much talked-about decline has coincided with our global plan to make everyone sorry for messing with us. Or maybe we spent a trillion dollars on false friends and fixing countries that are as broken as when we found them, and we have no one to blame but ourselves.