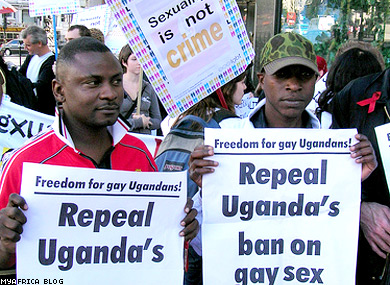 For those of us generally committed to cultural relativism, Uganda’s proposed anti-gay legislation raises some difficult issues. On the one hand, different cultures hold different values, and tolerance has little meaning when we only apply it to things we agree with. On the other hand, what the fuck is wrong with you people, people of Uganda? While they’ve backed off a little from the initial draconian bill—currently proposed legislation has abandoned the death penalty for repeat offenders in favor of life imprisonment, which, just for reference, never turned anybody straight—Ugandans still seem intent on eradicating homosexuals from their society. The question is, why now? Presumably, there have been gay dudes in Uganda forever, and it’s not like they’ve just had an Islamic revolution or anything. What could possibly have prompted the Ugandan government to declare homosexuality a threat to the nation in April of 2009—oh, hello, consortium of American evangelicals. You’re looking exceptionally tan. Is it because you just got back from leading a series of talks in Uganda about how homosexuals undermine Biblical values and threaten the traditional African family? What a coincidence—I was just talking about how Uganda has begun enacting legislation to systematically exterminate homosexuals. So, um, want to use the men’s room with me?

According to the New York Times, the evangelical Christians—including Scott Lively, who wrote the book 7 Steps to Recruit-Proof Your Child; Don Schmierer, a board member of Exodus International; and Caleb Lee Brundidge, a formerly gay man and “sexual reorientation coach”—were billed as “experts on homosexuality.” They presented a three-day seminar to thousands of politicians, clergy members, teachers and police officers, covering such topics as “how to make gay people straight, how gay men often sodomized teenage boys and how ‘the gay movement is an evil institution’ whose goal is ‘to defeat the marriage-based society and replace it with a culture of sexual promiscuity.'”

Now, those same evangelicals are shocked that Uganda is taking action. Lively admits to meeting with Ugandan lawmakers about the legislation, and wrote on his blog in March that his presentation has been likened to “a nuclear bomb against the gay agenda in Uganda.” Still, after telling them that gay men are conspiring to rape their children, Lively claims to be surprised that Ugandans have reacted so harshly. So do his cohorts, who deny any expectation that their words would become law. “I feel duped,” says Schmierer.

If Schmierer was duped, one has to wonder what he was expecting in the first place. Reverend Kapya Kaomo, who has chronicled the connection between American evangelism and the anti-gay movement in Africa, believes that the Americans “underestimated the homophobia in Uganda” and “what it means to Africans when you speak about a certain group trying to destroy their children and their families.” Schmierer, Lively and Brundidge thought they were just going to give a fun lecture about how gay people want to end society, maybe say a few prayers, dance with a couple of churchy black girls afterwards—not actually advocate a real course of action. “When you speak like that,” Kaomo told the Times,“Africans will fight to the death.” Which raises an interesting point: apparently, America is a place where you can tell people that a certain group is trying to destroy children and families and expect that no one will do anything about it.

It would appear that the difference between the United States and Uganda exposed by this issue is not so much a Tolerance Gap as a Shrillness Gap. We’re used to hearing talk of a gay agenda and a nationwide plan to undermine marriage and indoctrination in schools and other rhetoric that, if we took it as face value, would send us armed into the streets. The language of the religious right is a particularly crass example, but this sort of absurd hyperbole can be found in pretty much all corners of American discourse, from analogies between Barack Obama and Hitler to claims that weird herbal dick pills will make you popular at work. The gay rights debate in this country has been subsumed into our great American tradition of Just Sayin’ Stuff, which arguably began during the 1828 general election, when Andrew Jackson was accused of murder by John Quincy Adams, and continues to this day in Sarah Palin’s death panels and any commentator with the same name as a band (Beck, Rush, Michelle “2 Live Crew” Malkin.)

Just Sayin’ Stuff is the consequence of a reified politics; there is little potential for sudden, dramatic change in gay rights in America, so the rhetoric expands to fill the space where action would be. Pat Robertson can claim that Hurricane Katrina was caused by increasing acceptance of gay marriage and not be viewed as an evil and/or crazy person because there’s no danger of Pat Robertson ever turning his beliefs into actual policies. Glenn Beck can claim that the President is unconstitutionally leading us toward a socialist/fascist totalitarian system because the American people could not plausibly overthrow the federal government. Our country is so solidly constructed—or at least inflexibly assembled—that we can speak in the mode of children, who are allowed to throw tantrums because they’re too small to break anything.

The Ugandans are apparently not so settled. The rhetorical irresponsibility of a few fundamentalists have made the Christian church at least partially responsible for what may easily become a Nazi-esque social extermination. Way to go, guys. If any group of people should understand that words mean something, it’s the Christians. It’s sad that, for all their talk of logos and the word made flesh, the most ostensibly moral among us are still willing to distinguish between what they say for money and what they mean.