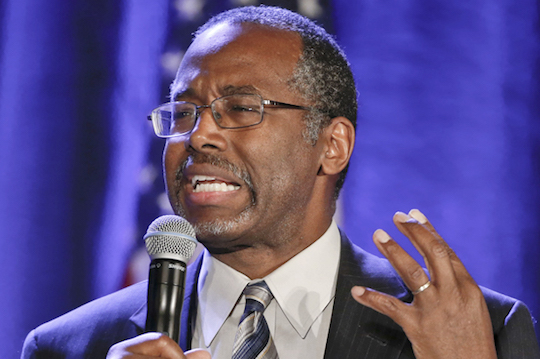 Let us not forget that Rick Santorum won Iowa in 2012. We think of that caucus as a bellwether, but it may just be the first one. Still, the prospect of Trump and Carson trading wins throughout next spring seems terrifying and at least a little real. On Twitter, Robert Costa has articulated the possibility of the “GOP elite’s nightmare scenario,” in which the party’s two least-qualified candidates split Iowa, New Hampshire, and the southeastern states, leaving little room for…whom?

Jeb Bush seems to be numbly dismantling his campaign. Marco Rubio polls well nationally, but he’s in single digits in Iowa, New Hampshire, and South Carolina. Combat! blog’s favorite Republican candidate,1 John Kasich, seems universally reviled, and Cruz stabbed Russell Crowe in Gladiator. You can think of reasons these people are viable, but none of them looks better than Trump or Carson at this moment.

While we’re remembering 2012, though, we might remember that Herman Cain, Santorum, and even Michele Goddamn Bachman were all front-runners at one time. Eventually, Republicans settled on a sensible choice. The question seems to be whether 2016 will be like that, or if it will be like 2012 without the eventual return to sense.

The yellow-dog Democrat in me kind of hopes it doesn’t, but the American hopes it will. We need a sane and electorally viable conservative party to balance out the other side. The Hillary of untrammeled power—even the Bernie Sanders of untrammeled power—would probably not be good. Here’s hoping the Republican Party gets well soon, and that Carson stops comparing everything to slavery.