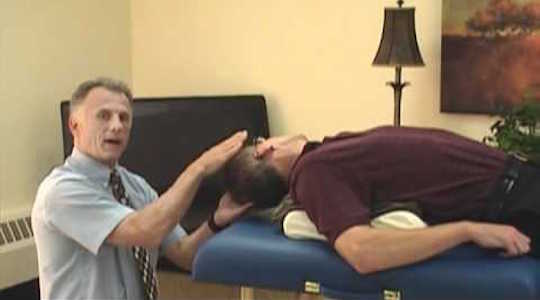 The Epley Maneuver, which feels as good as it looks

Close observers of Combat! blog will note that it ceased to exist for the last several days. That’s because I have been what doctors call super fucked up. Two weeks ago today, I woke in a cold sweat with the room spinning about me. As is my practice in such situations, I vomited, went back to sleep, vomited, tried to work, vomited, and then conceded that maybe I should see a doctor. I am fully insured thanks to the dread Obamacare, but my doctor was booked for weeks, so I went to the clinic for people without insurance. They diagnosed me with an ear infection and prescribed antihistamines. I spent the next few days in bed and mostly recovered; I would get really dizzy and fall over if I looked down and to the left or if—heaven forfend—I rolled onto my left side in my sleep. But mostly I was okay.

Last Tuesday, I flew to Des Moines for my grandmother’s funeral, which was Thursday. I woke Thursday morning unable to stand and vomiting uncontrollably. I spent the funeral in urgent care at Mercy West, where a twitchy doctor asked me a series of questions whose answers he interrupted. Then he prescribed Zofran. Zofran is great for treating nausea, and I wish I had known about it during my vomit-intensive childhood. Doctor Twitchy identified my problem as benign paroxysmal positional vertigo, caused by calcium crystals in my inner left ear that had become detached from their appropriate nerves to create the false sensation of sudden, dramatic movement. He recommended the Epley maneuver, by which I mean I asked him if I should do it and he said sure. I did it on my left side as much as the spins would allow. On Sunday I flew back to Missoula—an exercise in focused meditation made more difficult by the man next to me, who  tried valiantly to stay out of my seat but was dimensionally unable to do so.

Yesterday I went to Now Care at St. Patrick’s Hospital, which is like a doctor but you can see them now. I briefly experienced the life of a junkie by manipulating the physician on duty into prescribing me more Zofran. He sent me downstairs to an audiologist, who moved my head in various sudden ways while looking closely at my eyes. By these methods she determined that the problem was actually in my right ear, and she did the Epley maneuver to me accordingly. It was similar to how I did it at home but with much more kinking and turning of the neck. Those of you who have been in a cervical crank know the feeling.1 She sent me home with instructions not to lean over or lie down for the next 24 hours. I slept in a chair last night, by which I mean I stayed up all night in a chair, thinking about how sleeping pills don’t actually work. But—and this is really, really important—I think I am cured.

Thus ends the illness narrative. Back in 2007, when I suffered a series of significant injuries in rapid succession, I learned that an illness narrative deeply compels the protagonist and bores everyone else. The story of what happened to my body and how bad it felt is an uncovered conspiracy to the person telling it and an excursion into pointless detail for the listener. It reveals nothing but circumstance. There is no tension in it: I felt bad, I got better, I pity myself. The sole possible twist—I died—is obviated in the telling. It’s the kind of story your friends will indulge and your good friends will discourage.

Thank you, friends, for indulging me these last few days’ absence and these last few hundred words’ account. I recognize that they are boring, but spending the last two weeks as the apparent center of a rapidly spinning world has warped my perspective. I took my friend’s dog for a walk this morning and experienced the peculiar alienation that comes from staying up all night. “These people,” I thought as he trotted down the trail ahead of me, spooking bicycles, “have no idea what’s important.” What’s important is me. Obviously that’s not true, but it seems so the closer you come to losing yourself, however incrementally.