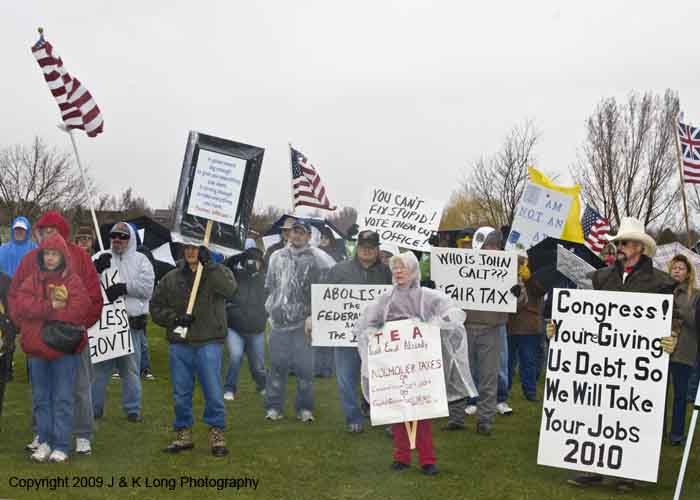 Tea Party protestors in Greeley, CO protest the runaway taxation of the Obama administration, which taxes at exactly the same rate as the Bush administration.

There is a storm brewing across our great nation. From Spokane to Schenectady, decent, hardworking Americans who watch television at 4pm are joining together to question their federal government. “Why do you continue to exist?” they ask. “Why can’t we get back to the government we had in 1789, which apparently included Medicaid and Social Security? Have you heard that a black guy is President now?” They are the Tea Party, and they object to taxation and spending. They may also be entirely the creation of the country’s second-biggest cable news network, owned by the world’s 132nd-richest man, but that doesn’t stop them from being a legitimate political party. Sort of. And nowhere is the newly-consecrated Tea Party so influential as in Colorado, where the GOP has chosen as its candidate for governor Scott McInnis, largely because he has the Tea Party’s backing. Kinda. The important thing is, he’s winning. I guess. To hear Fox News tell it, at least, the awesome power of the Tea Party has swept Bill McInnis to certain victory in Colorado. Except maybe they made it all up.

“All of the big government talk in Washington suits my next guest to a T—a tea party,” says Neil Cavuto, who is presumably the template for Phil on Frisky Dingo. “Although Republican Scott McInnis is not a tea partier right now, he is the country’s biggest Tea Party candidate. And don’t put your tea cup down, but this guy’s leading.” That statement is technically true, in that McInnis currently has a four-point lead 11 months before the election, in a Fox News poll whose margin of error is four points. Cavuto, via the time-honored Fox News technique of using news to present opinions to its viewers via an interview question, goes on to assert that McInnis is running as a Republican but isn’t married to the party so much as to the cause of fiscal responsibility and limited government. “Tea Party backed candidate leading in Colorado governor’s race,” says the screen crawl.

The only hitch is that the Tea Party hasn’t backed him. According to Bob Moore at Coloradoan.com, the two largest Tea Party-affiliated groups in the state—the Tea Party of Northern Colorado and the Loveland 9-12 Project—have written a letter to their supporters attacking McInnis and his presumption that he has their endorsement. “It’s one thing for McInnis to run lock step with his party, that’s his choice, but to actually mislead the media and the public to believe he has the support of We The People is nothing short of dishonest,” said an e-mail by Lesley Hollywood of the Tea Party of Northern Colorado.”We are being played like pawns. And we can’t put up with it.” Maybe they should gather with signs outside his office and demand that he run more like his great-great-grandfather.

In fairness to McInnis, it was Fox that painted him as the Tea Party’s chosen candidate, not him. Cavuto makes a series of contradictory statements at the beginning of the interview, simultaneously claiming that he is “not a tea partier” and calling him “the Tea Party candidate.” McInnis doesn’t say anything to contradict those statements, though, despite being a lifelong moderate who only adopted the vaguely Tea Party-esque “platform for prosperity” at the insistence of the right wing of the Colorado GOP. It turns out that McInnis is the front runner because CO Senate Minority Leader Josh Penry dropped out of the race, leaving McInnis without a serious opponent for the Republican nomination. After professional douchebag Tom Tancredo announced he would “probably run,” McInnis was forced to adopt a series of conservative positions in order to solidify his base in the party. Now McInnis is stuck with a policy agenda that includes proposals that are already laws, tax cuts that can’t be paid for, and promises to repeal unrepealable laws, and he doesn’t even have Tea Party support to show for it, whatever that is. As my grandmother says, pigs get fed—hogs get slaughtered.

The interesting question in all this is, why would Fox News announce that McInnis has the support of the Tea Party when he obviously doesn’t? Sure, before they announced it on cable TV, nobody from the Tea Party was publicly saying they didn’t support McInnis, but they gave no indication that they did. It’s almost as if Fox assumed that the Tea Party didn’t actually exist, and the network could ascribe whatever official position they wanted to them because they didn’t have an office. Fox created the Tea Party, after all, and they should be able to use it to herd reactionary populists toward the Republican party. I mean, that’s how a corporate-sponsored propaganda machine works, right?

Unfortunately for Fox News, after six months of trumpeting their phony movement as if it were the most important development in US politics since the touch-screen voting booth, the Tea Party has become real. Rupert Murdoch is like the kid in Weird Science: his fantasy has come to life, and now it’s wrecking his party. That Fox New took the first opportunity to try to throw tea partiers behind whatever Republican candidate they could find is a testament to how little they believe their own news reporting. That the monster is now rebelling against its creator is proof that, no matter how uniformed and uniformly obese they may be, the Tea Party is real. God, I hope this isn’t the new American conservatism we were talking about. The long-term loser in this whole affair—be in the Republican Party, Fox News, the Tea Party or America in general—has yet to become clear. The short-term loser is Scott McInnis. The tea partiers may love to be told what to think by Fox News, but they hate to have to admit it, and you can’t make them.