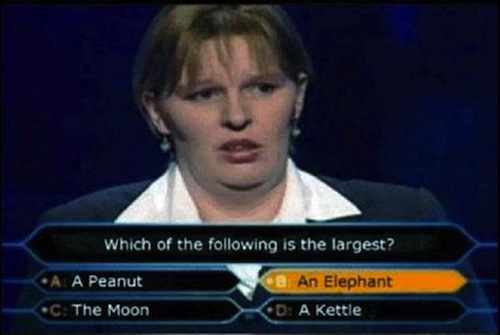 One of the great vexations of the modern age is trying to figure out whether we’re actually experiencing the dumbest generation in human history. Logic would suggest that previous generations were much dumber than us. We have ready access to iodine, for example, and we do not believe that flies emerge spontaneously from rotting meat. We all use computers. If you put Julius Caesar in front of a computer, he would have no idea whether to give it some sheep entrails or what, and he was one of the smartest dudes of his millenium. Yet the catch of the modern perspective is that we know only the most clever people from history, whereas every jackanapes currently alive is, you know, right here. The internet only magnifies this effect. It’s hard not to despair when you have real-time access to the fervently professed opinions of people who know not a goddamn thing and couldn’t put the first thing with the second if they knew two, but who can say? Probably, we’re all smart enough to know that we only seem dumb because we can see ourselves so clearly. Still, there has to be one dumbest generation in history. Maybe it’s us.

The only way to be sure would be to construct some kind of standardized test. Forty-some years ago, the good people at the College Board corporation did just that, and this year America’s high school students put up the lowest average SAT reading comprehension scores in test history. To be fair, reading is gay. Anyone who has tutored the SATs will tell you that reading is the hardest section to teach, in part because it is less susceptible to the sort of rote systematization so effective on the math and writing sections.*

That’s just the kind of applied learning that kids today are good at, whereas the kind where you read and think about one thing for four minutes straight is virtually impossible. College Board—you mustn’t call it “The” College Board or you’ll legitimize them—attributed the lower scores to greater “diversity” among test-takers, which doesn’t sound racist from the perspective of a statistician. A much, much greater percentage of high school students takes the SAT than ever before, because now we expect everyone to go to college. Whether that is a sign of rising or plummeting intellectual standards is open to interpretation. Interpret now, because future generations won’t be able to.

You think that all those college-bound seniors are historically dumb, but then you see John F. Kennedy’s Harvard application. They didn’t have SATs in 1935, so people had to get into college the old-fashioned way: their dads went there. JFK’s three-page(!) Harvard app had room for five sentences of personal essay. Here’s what the man who said most of Profiles in Courage put down:

The reasons that I have for wishing to go to Harvard are several. I feel that Harvard can give me a better background and a better liberal education than any other university. I have always wanted to go there, as I have felt that it is not just another college, but is a university with something definite to offer. Then too, I would like to go to the same college as my father. To be a “harvard man” is an enviable distinction, and one that I sincerely hope I shall attain.

One of the reasons “for wishing to go to Harvard” is that he always wanted to go there. He clearly had a good tutor, though, because he at least remembers to mention his father. Unquestionably, the single best thing you can say in your college essay is that your wealthy father attended the institution where you are applying. The name Joe Kennedy meant something, too, probably because he insisted on the kind of straight shooting he shows in his letter to the dean: “Jack has a very brilliant mind for the things in which he is interested, but is careless and lacks application in those in which he is not interested. This is, of course, a bad fault.” Thanks, Dad.

Just because you’re a favorite son doesn’t mean you’re going to be treated like a favorite, or even a son. At last night’s Republican debate, the party of flags and soldiers reminded us that they’re also the party of babies by booing this gay serviceman:

Also, Rick Santorum does not believe that social policy has any place in the military. It is apparently the only aspect of government he feels that way about. To watch this man argue passionately that not making sexual orientation a court-martial offense is an application of social policy is to understand the contemporary Republican Party.

Maybe it’s just to understand the weirdo entertainment brand that has replaced it. You’ve got your Sarah Palins and your Beck Limbaughs on the A list, and the B- and C-listers have to scramble for as much notoriety as they can assemble. In Arizona, C-minus-lister Sheriff Joe Arpaio—the self-advertised “toughest sheriff in America”—has assembled a “cold-case posse” to investigate President Obama’s birth certificate. Remember when that seemed settled? Yeah, you still can’t prove a negative. At this point, the birthers’ refusal to acknowledge the legitimacy of a publicly released government document borders on TFD. But you’re not going to get famous just acting stupid; you have to act proudly stupid, say by calling yourself a posse and appending the name of a popular TV show to the front. The logical conclusion of our democratic experiment is that a small-town sheriff can devote his life to harassing the President for being black.

I don’t know about you, but I need a palate cleanser. Hemlock, for example. Hemlock being unavailable and possibly not a real thing anymore, how about you descend into a comfortable fog of idiocy with this video of cute things exploding? It even has that one song from Bugs Bunny: