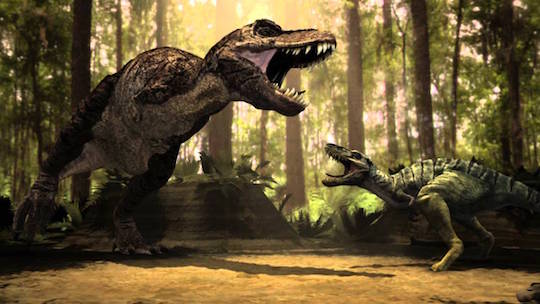 Pictures of Mountain Water are boring, so here are two dinosaurs fighting.

Back in September of 2014, the City of Missoula announced, with some embarrassment, that it had spent all the money it expected to spend on the legal effort to purchase Mountain Water before trial began. That initial estimate was $400,000. Today, the legal bill approaches $6 million, and we don’t own the water company yet.

The city’s gross underestimate of the cost of condemnation is not the only place where it seems to have failed at due diligence. At a meeting of the City Club in January last year, no one involved in the purchasing process could say what a good price for Mountain Water would be. The Carlyle Group rejected the city’s original offer of $55 million. Everyone seemed to agree that their $115 million counteroffer was too much. But nobody could say at what price buying Mountain Water would save ratepayers money over the life of a 20-year bond. Although they were preparing to make the largest single purchase in Missoula history, no one in city government had run the numbers.

The justification at the time—or maybe the excuse—was that we would have the water company forever, and pretty much any cost was worth it because the community would benefit from owning its own water system. There’s a convincing philosophical argument there, if not a financial one. But Montana Supreme Court Justice Beth Baker suggested last week that she rejects the philosophical case for eminent domain, and that she views the city’s overall argument for the necessity of condemnation with skepticism.

And suddenly questions like how much we were spending on legal bills seemed more importantly. The court might well find in Missoula’s favor, in which case we’ll get Mountain Water for just shy of $90 million, plus our own $6 million and whatever the process cost Carlyle.1 But if the Supreme Court determines that Missoula cannot force the Carlyle Group to sell, we’ll be out $6 million-plus and have nothing to show for it.

I consider that outcome in this week’s column for the Missoula Independent. If the city indeed emerges from this process with no water company to show for it, issues like being off on the legal estimate by a factor of 15 or never actually calculating a fair price will look less like the cost of doing business and more like the cost of doing business poorly. But hopefully the case will go our way, and this time next year we’ll all be drinking city water. Inshallah.