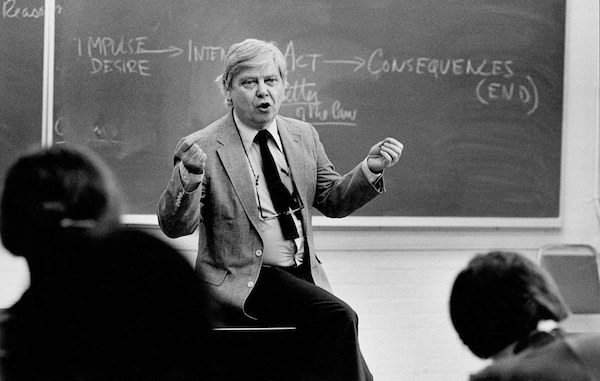 Today I read an email—from a smart guy who was clearly a top-decile writer of English—that contained a parenthetical aside inside a parenthetical aside. Neither interruption improved my understanding of the sentence or my assessment of the person who wrote it, but I sympathized. The urge to add one more layer has overcome us all. Probably it is more likely to overcome those of us who have a knack for writing sentences. Nuances occur to us and we try to pack them in, for the same reason we overfill the tacos we make at home, until anyone else who tries to eat them winds up with a mess running down the back of their hand. The mess in this analogy is, uh, implications lost to unclear syntax. The filling falling out of the back of a taco is the failure of reading comprehension, whose rate increases with complexity until the audience for a given sentence shrinks to one. I am sorry for the inscrutable metaphor, but I had so much meaning for you to savor and I wanted to pack it all in there, until the tortilla just split apart.

How we put meaning into English sentences—or rather how it enters the reader’s mind unbidden, particularly overtones of sexuality related to color—is the subject of William Gass’s On Being Blue, which is billed as “a philosophical inquiry.” It is that. It is also a tour de force, partly because form follows function and partly because, it would seem, Gass really enjoys writing. That’s the gist of his surprisingly affecting closing argument, which is that [SPOILER ALERT] you’re going to die soon, so you should write as much as possible. He does not explicitly advocate this kind of maximalism until the end of the book, but he tacitly endorses it along the way through maximalism of other kinds.

On Being Blue is hard to read. Despite his argument that the function of the writer is to create, via sentences, a consciousness for the reader to experience, a lot of Gass’s sentences demand we step away for a second to figure them out. I often read before bed, but I found that I could only comprehend this book in daylight. My approach was to read a sentence, think about what it meant, and then read it again to check my work. The distance this method imposed was compounded by the fact that I was re-reading; I first read On Being Blue about five years ago and, I realized with growing horror, remembered very little from the first time through. Instead of recognizing old twists and turns, I found the book to be like a hedge maze that, embarrassingly, I was lost in for a second time. The flaw in this analogy is that you cannot step up into the air and consider the hedge maze from above, whereas I kept removing myself from the flow of Gass’s argument to puzzle out what he just said.

This thicket of language is the right way for Gass to expound his theories of connotation and how the sentence says what it does not state. Most failures of comprehension were my fault. Occasionally, though, I was taken by the uncharitable suspicion that he was being intentionally abstruse. Take this paragraph from page 73, where Gass is discussing the changing significances of blue over time:

Seldom was blue for blue’s sake present till Pollock hurled pigment at his canvas like pies. Rarer still, since such sensitivity in the brush tip is a rarity (in the penis rarer, in the poet rarest of all), color became the breath of bodies, every hue the aching limit of a life, as if it rose up from within the substance it covered the way feeling changes the color of the chameleon, or like those remarkable cephalopods whose configurations alter with their moods, or as, inadequately, our own blood comes and goes like sunshine dreaming among moving clouds.

Emphasis added, and bro: you’re thinking of an octopus. That’s the remarkable cephalopod whose configuration alters with its mood. If you were to use this term that every child knows, you would admittedly lose some elucidation of meaning but also shave off one euphemism and two subclauses from what is already a very cumbersome sentence. I’m willing to do the work, but don’t make me jump through hoops to prove how cunningly you make them.

Clearly, this kind of maximalism is a choice. The question is whether it is necessary, which is a polite way of asking whether it’s performative. Maybe that parenthetical about penises and poets is necessary to unify perceived color with subconscious sexual desire and the artist’s craft, which is an important part of Gass’s overarching thesis that “blue” material enters into language through color and metaphor. Or maybe he made the connection and couldn’t resist pointing it out, i.e. telling us that he did.

That may be the real inquiry at hand in On Being Blue. Where does sophistication shade over into demonstration? When does the parenthetical not add another shade of meaning but rather indicate, as my high school English teacher said it did, a part the author knew he should leave out but lacked the discipline to cut?

Gass makes a compelling argument that there is another type of discipline: the type that leaves everything in, overfilling the taco but doing it so skillfully that nothing falls out. On Being Blue is proof it can be done, but I still wouldn’t eat it in the car, so to speak. It’s thrilling for that reason, though, and in its insistence on radical density it becomes a kind of manifesto. Part of maximalism is doing what is not strictly necessary, and in writing that is usually synonymous with failure. Paradoxically, it is also the precondition for success.

50 Books in 2018 is a recurring feature. Next on our reading list: A Bad Man by Stanley Elkin.