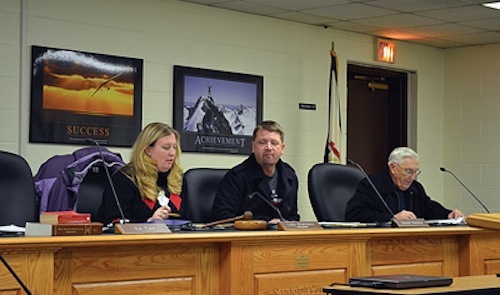 The Randolph County, NC Board of Education meets in front of some Successories posters.

In response to a parent’s complaint, the Board of Education for Randolph County, North Carolina has voted to remove copies of Ralph Ellison’s Invisible Man from school libraries. The complaining parent is one Kimiyutta Parson, mother of an 11th grader at Randleman High, which is presumably named after Kevin Randleman. Committees at Randleman and at the school district level recommended that Invisible Man be kept on the curriculum, but members of the BOE—who were given copies of the book to read last month—disagreed. Board Chair Tommy McDonald called it “a hard read.” “I didn’t find any literary value,” said member Gary Mason. Excerpt from Parson’s complaint after the jump.

Parson’s argument for banning Invisible Man was 12 pages long. It begins in classic book report form, but it kind of goes off the rails from there:

The narrator writes in the first person, emphasizing his individual experiences and his feelings about the events portrayed in his life. This novel is not so innocent; instead, this book is filthier, too much for teenagers. You must respect all religions and point of views when it comes to the parents and what they feel is age appropriate for their young children to read, without their knowledge. This book is freely in your library for them to read.

Sic of sics; all is sic. Like a lot of people who don’t fully understand high school English, Parsons has trouble with the word “portray.” Like the technically incorrect claim that the “narrator writes in the first person,” she fails to keep a clear distinction between the world of the book and the world of, um, the world. The author writes in the first person while the narrator narrates. By the same token, the events of Invisible Man are not portrayed in his life; they are portrayed in the book.

Parson’s standard of diegetics is not the issue here, however. The issue is her standard of innocence. She draws the line at “so innocent.” Implicitly, books that are merely innocent would still be too filthy for high school students. But Invisible Man is “filthier, too much for teenagers.”

Parson’s syntactically vexed claim that the book is too much filthier for teenagers introduces a signature feature of her running prose style: forgetting clauses that came before. When she says that the school board “must respect all religions and point of views [sic] when it comes to the parents and what they feel is age appropriate for their young children to read,” she appends “without their knowledge” and throws multiple antecedents into question.

The school board must respect religions without their knowledge? It must respect what parents unknowingly feel is appropriate for children to read? Presumably, Parson is referring to what children read without parents’ knowledge, so “they” are parents. But in the very next sentence, she complains that Invisible Man is “freely in your library for them to read.”

In that sentence, “they” are the “young children” who constitute the 11th-grade class at Randleman High. Rising juniors there are required to choose one of three books to read over the summer, from a selection that includes Invisible Man. Honors students must choose two. First of all, it’s a classic move to make reading twice as many books the punishment for honors status. Second, Randleman High juniors don’t even have to read Invisible Man.

Parson could have protected her own personal child from reading one of the best novels of the 20th century without doing anything at all. Her complaint that Ellison’s novel is available for children to read without their parents knowledge suggests that her kid selected it and then she read his copy. Rather than banning a novel that won the National Book Award from a bunch of school libraries, Parson might have enforced her own point of view on her own child by maintaining a passing familiarity with high school-level American literature.

Perhaps it is unfair to perform a close reading of a concerned parent’s letter to a North Carolina school board. You may even find it distasteful. But Kimiyutta Parson does not know a damn thing about written English. You can see her disdain for language in her subliterate letter to the Board of Education. You can see it in her insistence that they are obliged to “respect all point of views” by letting each parent remove books from the whole district’s libraries.