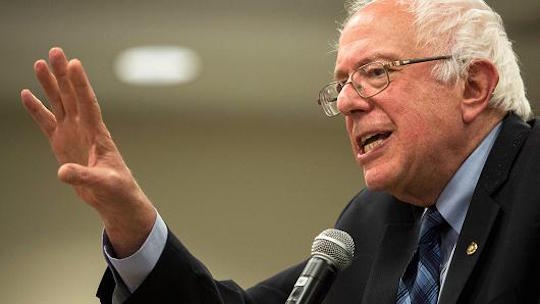 There is very little Combat! blog today, since I was required to usefully intervene in a chiropractic emergency this afternoon. But I couldn’t help noticing Chris Cillizza’s intensely critical gloss of Bernie Sanders’s remarks on the possibility of endorsing Hillary Clinton. Here’s a sample of the remarks Cillizza called “remarkably condescending” and “by turns baffling and surreal”:

It’s not a question of my endorsement. It’s a question of the American people understanding that Secretary Clinton is prepared to stand with them as they work longer hours for low wages, as they cannot afford health care, as their kids can’t afford to go to college. Make it clear that she is on their side, that she is prepared to take on Wall Street, the drug companies, fossil fuel industry. Deal with the global crisis of climate change. I have no doubt that if Secretary Clinton makes that position, those positions clear, she will defeat Trump and defeat him by a very wide margin.

It sounds like Sanders is demurring on the question of his own endorsement by urging Clinton to adopt a platform that will appeal to left-leaning voters. Perhaps that is quixotic or even petulant, given that he is (still) running as a Democrat, and Clinton will be the Democratic nominee. But it is not “stunning,” as Cillizza has it, nor “amazingly condescending,” as the headline promises. If it is condescending at all, it is no more so than asking a man still campaigning for the Democratic nomination when he will endorse his opponent.

I think Sanders should probably drop out. But insofar as staying in might pull the party platform to the left, he should keep at it. There are a lot of people struggling out there, and right now the interests of poor and lower middle-class voters are not being served by either party. Their choice is between a socially conservative party of the investor class and a socially liberal1 party of the investor class. As that same Bernie Sanders argues in the New York Times today:

Millions of American voters, like the Leave supporters, are understandably angry and frustrated by the economic forces that are destroying the middle class. In this pivotal moment, the Democratic Party and a new Democratic president need to make clear that we stand with those who are struggling and who have been left behind.

The angry, working-class voters who turned to Trump and wrecked the Republican Party are the Democrats’ target audience. Clearly, they want something different. I think Sanders is right to withhold his endorsement from Clinton at this point, because she has shown little commitment to the policies that he brought into the race. Those policies appeal to millions of voters. The Democrats would be mistaken to leave them on the table just to reassure, as Sanders puts it, “a handful of billionaires.