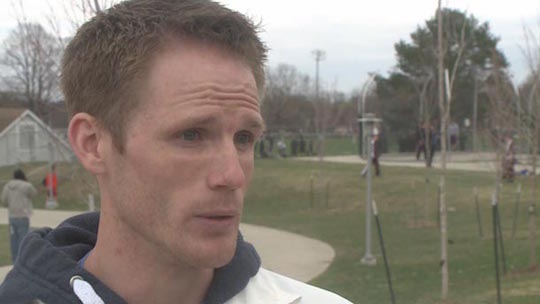 Spencerly Griffin sent me this news bulletin from West Des Moines, where Dowling Catholic High School first extended a job offer to teacher Tyler McCubbin and then rescinded it because he is gay. It’s weird, because Dowling was my rival high school growing up, and we determined that they were all gay. But the problem is that McCubbin, who has worked as a substitute teacher and volunteer track coach at Dowling since the beginning of the school year, is openly gay. Local news station KCCI says that according to Bishop Richard Pates of the Des Moines diocese, “McCubbin wasn’t denied the job because he’s gay, but due to the openness of his sexual orientation.” Spoken like a Catholic priest, bro.

As a private religious school, Dowling can hire however it wants.1 It still has to deal with the public censure that comes from working with a guy for seven months and not realizing he’s gay, offering him a permanent job, and then revoking the offer when they discover he’s gay by looking at his Facebook.

This chain of events puts two holes in the Bishop’s argument. The claim that McCubbin was denied the job for being too openly gay seems to be false, because he worked at the school for seven months and went through the whole interview process without anybody noticing. He’s so openly gay that a bunch of people who were presumably on the lookout for that had to check his relationship status on Facebook.

Either that, or McCubbin went through the whole interview and substitution process without forcing anyone to acknowledge that he was gay. This is perhaps the more plausible scenario. I suspect that both the Dowling faculty and Bishop Pates’s administration already contain someone else who is gay. Perhaps that person is just a “confirmed bachelor” or an “ordained priest”—wink wink. Such people are immune to the church’s staunch no homo policy, because they never make anyone enforce it, in much the same way a brown bag makes you immune to open container laws.

This brings us to the second apparently false statement in the Bishop’s remarks. And I quote:

“We accept everybody, we love everybody. Everybody is always welcome within the context of the Catholic Church.”

Unfortunately, a bolt of lightning struck the KCCI camera before Pates could add, “as long as they’re into shame.” McCubbin is welcome in the context of the Catholic church; he’s just not welcome to work at their school, because of church teachings. It’s okay to be gay, but it’s not okay to be openly gay. Such reasoning muddies the line between acceptance and something else.

It’s almost as if two church doctrines are in conflict on this issue. The Bishop is at pains to explain that the Catholic church loves everybody, but he also must uphold the church’s policy that one kind of person is bad. Okay, not the person—but the behavior that defines that person totally in the eyes of the church. We can see how important these fine distinctions are in practice. The church can talk all it wants about how it welcomes gay people, but the timeline here goes from acceptance to discovery to rejection.

It’s satisfying that McCubbin was offered the job before Dowling figured out he was gay, and it’s satisfying that he’s been working at the school in another capacity for months without anyone noticing. Clearly, his sexual orientation is immaterial to his work. Pates can say it’s not who he is but what he does, but what he’s done for the last several months got him a job. Who he is lost it for him.

Between the parts about not lying with a man as one lies with a woman, I think the Bible has something to say about lying period. Bishop Pates is in a tough spot, here, because he has to defend an obviously bigoted action by a church that thinks of itself as a beacon of loving acceptance. I was going to say he can be forgiven for twisting his logic, but no, he can’t.

The dude is a Catholic bishop. He’s supposed to be a moral leader and a messenger of what his church consistently refers to as the Truth. If he can’t reconcile the church’s professed beliefs and its actions without resorting to tortuous logic, then maybe something has gone wrong. Maybe Dowling is hard to defend in this situation because it doesn’t deserve defending.