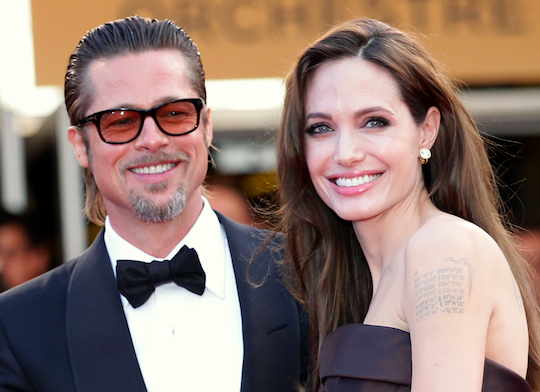 The world recoiled today as celebrity boyfriend/girlfriend Brad Pitt and Angelina Jolie, popularly known as “Angelad,” broke up and disappeared. They broke up because they stopped loving each other. Now Angelad is gone, and 20 years of memories are gone with them.

Pitt and Jolie first met on the set of Mr. and Mrs. Smith in 1996. At that time, she was married to Billy Ray Cyrus. Pitt would come to her trailer every morning, knock on the door, and ask if she was home. “It’s me,” she would tell him. “I’m Angelina Jolie.” He started to recognize her, and they fell in love.

Meanwhile, Jennifer Aniston was making Friends. “Phoebe,” she would complain, “I think my boyfriend Brad is cheating on me.” The actress who played Phoebe listened politely, but she did not offer meaningful emotional support with clarifying questions. Ironically, no one on Friends liked Jennifer Aniston. This kind of irony would plague her the rest of her life.

Then shooting on Mr. and Mrs. Smith bogged down, stranding Pitt and Jolie together in the Swiss village of Portmanteau. They gradually changed their name to “Angelad” over the next six months. Although their relationship was ethically questionable, it garnered a lot of attention in the press. They became Hollywood’s new “power couple,” replacing cocaine and vodka. The public fell in love with their story, but it was not without its sad coda: Jennifer Aniston was forced to marry Billy Ray Cyrus and move back to Anustown.

For the next several years, America thrilled to Angelad’s exploits. The happy couple could be seen climbing mountains, auctioning off unclaimed urns from the crematorium, or just hanging out behind the Los Angeles County Museum of Art talking philosophy and whittling, respectively. They were young, beautiful, smart and handsome, respectively. And they were in love.

In 2008, to celebrate the election of Barack Obama, Pitt surprised Jolie by making her breakfast and bed. The eggs were covered in sawdust and the bed was not finished, but they made love in all of them. These events are familiar to everyone from the November issue of Newsweek.

In 2009, Jolie spoke out against the objectification of women by having her famous breast implants removed. She spent the next year traveling around the country removing other women’s breast implants. After she was finally apprehended, Pitt bailed her out of jail, and they kissed. These events were covered extensively in Us magazine and The Proceedings of the National Academy of Forensic Science.

The following year, Jolie adopted six Senegalese orphans. Not to be outdone, Pitt got a goldfish, but he forgot to put water in the bowl. Eventually the fish, known first as “Brish” and then as “Brad Fish,” dried out and died. The orphans thrived by comparison, and Angelad Fever spread to all but the remotest arctic weather stations.

Between the children, Jolie’s community service, Pitt’s home brewing hobby, his hospitalization for uncontrollable simultaneous defecation and vomiting (USDV), and their movie careers, the couple was busier than ever. Like many Americans, they spent the next few years aging. But behind Angelad’s happy facade, tension and eggs Benedict were waiting to explode, respectively.

In 2014, to celebrate their anniversary, Pitt surprised Jolie by having their name legally changed to “Bradula.” Although publicly overjoyed, she privately expressed concern “Bradula” did not contain elements from her name. It was the beginning of the rift between them.

The following year, while Pitt was shooting Oceans 2000, Jolie repainted their house and forgot to tell him. Pitt wasn’t seen for days. He was eventually found in Vince Vaughn’s potting shed, badly frightened. Jolie took him home, but he cried and cried.

The couple seemed headed for a reconciliation this summer, with more adoptions and possibly a movie together, but in the words of Hollywood, that’s all verkakte now. Angelina Jolie and Brad Pitt have broken up in a court of law. Their movies have been erased and the orphans returned to Senegal. Angelad has disappeared. If you see them, call 911 and tell them you’re crazy, because man, it’s over.