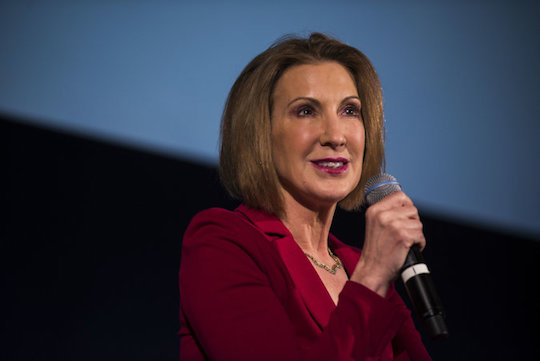 According to the precedents set by Citizens United v. FEC, so-called super PACs can raise and spend unlimited amounts of money in support of presidential candidates, so long as they remain independent from their campaigns. The key word in the Supreme Court’s decision has become “coordination”: the super PAC cannot work with campaign organizers to direct how its money and volunteer hours are spent. In practice, “coordination” has become impossible to prove—partly because super PACs and candidates cynically twist the spirit of the law, and partly because the Federal Elections Commission has lost its ability to enforce its own rules. That’s why the super PAC Carly For America—which received a letter from the FEC saying its name could not include a candidate’s name—changed to CARLY. Problem solved.

To the casual observer, CARLY still has the word “Carly” in it. That’s why the casual observer is not allowed to participate in politics.1 If you knew anything, you would know that CARLY is an acronym: Conservative, Authentic, Responsive, Leadership for You and for America.

Given the last word and the inappropriate comma, the super PAC should probably be called CAR[sic]LYA. But that would confuse its message of winking non-affiliation with the Fiorina campaign. Also confusing is the degree to which CARLY and the Fiorina campaign are obviously coordinating.

According to NBC, staffers from CARLY set up signs and tables for the Fiorina campaign at a town hall event in New Hampshire earlier this month. Fiorina told reporters CARLY did that unprompted, noting that her campaign’s events were publicized and anyone could swing by. As Amy Davidson points out in The New Yorker, it’s odd that the Fiorina campaign had none of its own people assigned to execute these basic campaign activities. If CARLY hadn’t spontaneously shown up, the campaign with which it does not coordinate would have been unprepared for its own event.

That’s the kind of compelling evidence that might establish a precedent for punishing future instances of obvious coordination. But who would punish them? It turns out the FEC will not, for the same reason many structures of our government stopped working lately: a bias toward inaction.

There are three Democrats and three Republicans on the Federal Elections Commission, and any significant enforcement action it might take—for example, reminding CARLY that the problem with its old name was the “Carly” part—requires a simple majority. So far this cycle, the commission has been deadlocked on nearly every issue it has taken up. That benefits whichever of its members might have an interest in seeing campaign finance laws go unenforced.

This is a hot take, but I submit that the current state of the FEC is a problem. A super PAC called CARLY that sets up chairs for the Fiorina campaign doesn’t just give her an unfair advantage; it builds an element of cynicism into the system. Any reasonable observer would conclude that the two organizations coordinate. When Fiorina et al persist in the conceit that they do not, they send a message to voters: it’s not what you know. It’s what we can get away with.

How am I supposed to vote for that? If your answer is “because everyone else you might vote for is doing it, too,” I immediately become less engaged in my democracy. I already have reasons to believe money will influence the 2016 election more than public opinion. Whichever millionaire eventually wins should be careful she does not tarnish the prize in the process of seizing it.