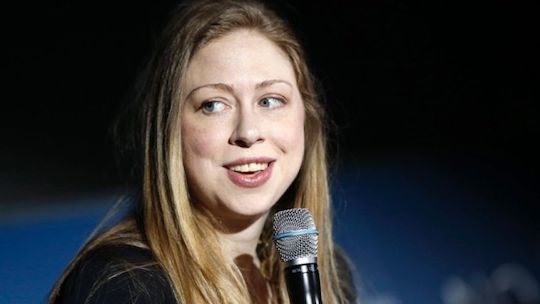 Chelsea Clinton was a featured guest at Variety’s Power of Women Luncheon in New York on Friday. Presumably, she reminded the women in attendance that they could do anything they set their minds to if they worked hard, stood up for their beliefs, and were the daughters of former US presidents. Let us not pretend that C. Clinton has achieved anything. There is nothing wrong with her, but she’s not inspiring. She’s a child of privilege who has held various sinecures. Normally I wouldn’t be a jerk about that,1 but she’s been all over the news lately, sometimes with rumors she will run for Congress. Let’s not do that, you guys. Let’s not make nepotism a more powerful force in American politics than it already is. And above all, let us not pretend that Chelsea Clinton has been persecuted or otherwise treated unfairly. I direct you to this headline in the Washington Post: An SNL star made an awkward Hillary joke at a luncheon. Chelsea Clinton went high. Props to Stubble for the link. It captures at least three bad narratives currently at large in American public discourse. Close reading after the jump.

So the occasion for this breaking news item is that Clinton was being honored for her power as a woman alongside Oscar nominee Jessica Chastain, former CBS anchor Gayle King, actress Blake Lively, Tony Award winner Audra McDonald, fashion designer and Beyoncé’s mom Tina Knowles, and CBS vice chair Shari Redstone. All of these women are impressively accomplished. It would have been cool to get some scientists in there, but let’s remember this event was sponsored by Variety. Even by the standards of a magazine devoted to celebrity, Clinton was conspicuously the least-accomplished person on the list. Perhaps that’s what host Vanessa Bayer was alluding to when she made the following joke, as described by the Post:

In her opening monologue at the event, the “Saturday Night Live” comedian introduced the six women who would be honored that afternoon: Jessica Chastain, Gayle King, Blake Lively, Audra McDonald, Tina Knowles, Shari Redstone and Clinton.

“And they all have one thing in common,” Bayer quipped. “None of their moms are president.”

Zing! Reporter Amy Wang—who, we should note, is almost certainly not responsible for the headline on this story—describes this remark as “a joke at the Clinton family’s expense.” I wouldn’t call it that, exactly. It certainly alludes to the Clinton family. But in what way does it demean or even criticize them? Chelsea’s mom isn’t president. That’s a true fact, even though it seems crazy, and it’s all we can think about when we see her.

The headline describes this joke as “awkward,” which brings us to bad narrative number one. Everything is awkward now. It’s America’s version of wabi-sabi. But what was “awkward” about Bayer’s joke seems only to be that it didn’t go over very well. It was clear, efficiently phrased, grounded in truth—the only thing awkward about it seems to be that people took it as a swipe at Chelsea.

This heightened sense of insult is bad narrative number two. The “Chelsea Clinton went high” portion of the headline is an allusion to Michelle Obama’s speech at the 2016 Democratic National Convention, in which she discussed raising her daughters in an atmosphere of pervasive negativity. “When they go low, we go high,” she said—a nice turn of phrase that immediately became a rallying cry. But who went low here? Even if you take Bayer’s joke as an insult, is it a low blow to point out that Chelsea owed her presence on that stage to her parents’ positions? What we have here is the structure of offense without the content. The headline frames this event as an instance of rising above cheap rhetoric with high character, when what really happened was that Bayer made a B-minus joke and Chelsea said this:

Vanessa, we may be able to say in this room today that no one’s mother is currently president. But someday, someone’s will be.

Ah yes—the inspiring message that someday we will have a woman president, and she’d better have children. This brings us to bad narrative three, the lionization of the Clinton family. Chelsea’s remark here is fine, I guess, but it’s just a bromide. We all want a woman to be president, even though we failed to make it so under unusually opportune circumstances last year. “Someday, someone’s will be” is a tangle of a phrase, lacking just the kind of felicity that made Obama’s “low/high” remark so memorable. Chelsea delivered an okay rejoinder that expressed the correct values—the kind of adequate performance that put her on the stage with those other six women who actually earned it.

This is the problem with Clinton fandom: It keeps treating adequacy as excellence. There’s nothing wrong with Chelsea.2 But there’s nothing particularly good or impressive about her, either. By treating her as a hero—by saying someone “went low” by speaking frankly about her privilege, and by acting as though she “went high” by offering a have-it-all platitude in response—this headline draws attention to the emptiness of the Clinton brand. Take away her famous name, and nothing Chelsea did here is remarkable. I was willing to accept Hillary on her merits. But don’t try to tell me her kid happens to be an inspiring woman, too. I know a lot of children of rich, powerful parents, and I can recognize the run of the mill when I see it.