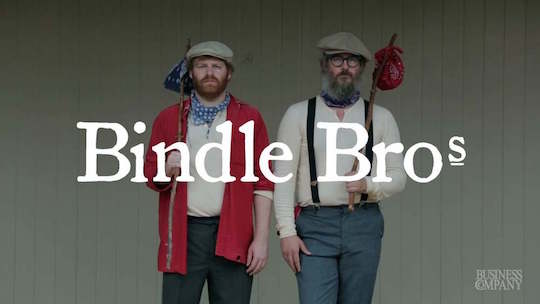 The Bindle Brothers of Brooklyn, from their “business company” site

One of the best features of satire, in my opinion, is how it encourages the uncharitable reader[/ref]or auditor, or viewer, or whatever[/ref] to attack at the wrong moment. It’s like a boxing feint. I first encountered this New York Times story on the Bindle Bros. of Brooklyn—an artisanal bindle company that uses “locally grown, naturally fallen” sticks to make $350 bindle bags—shared on Twitter with the comment “come on, Williamsburg.” The commenter had even retweeted the story from an original sharer who presented it as satire, but no matter: it fit his sense of hipster affectation, and he leapt to scorn it.

To reiterate: the Bindle Bros Bindle Business Company is not real. It is satire produced by the comedy writer Kemp Baldwin. It works because A) it follows the laws of the real world but twists their spirit to the extreme, and B) it’s funny. I cannot emphasize enough the importance of element (B).

We’ve talked before about the problem of “satire” that is so unfunny it’s plausible. Bindle Bros. walks the plausibility line; as Kemp noted, a segment of Brooklyn fashion has embraced Walt Whitman so thoroughly “I’m two steps away from buying one.” But taglines like “luggage at its purest” give us the wink. If you are actually engaging with the Bindle Bros. idea, those clues tell you what’s happening.

But if you are looking for reason to hate the Bindle Bros. idea—or if you only read the first two paragraphs of the Times story and shared it during that first rush of disdain—it’s more likely to get by you. Satire is great partly because it demands the reader hold up his end of the bargain. I came up with this complex idea whose details matter. You read it and think about those details, instead of guessing the gist and then filing it with similar ideas you already had.

Satire does not derive it’s humor from implausibility, exactly, but when it’s not funny it collapses into the plausible. Consider this piece from The Borowitz Report, Fact Checking Reveals GOP Debate Was Four Percent Fact. Besides beginning with an obviously partisan premise, this work of satire labors under the burden of an unfunny premise. As percentages go, 4% is not markedly funnier than, say, 82%. The fact-checking organization is named “Honesty Watch.” These are not lampoons of real facts so much as variations on them.

Compare to Walker Bummed He Was Unable to Show He Memorized Three Branches of Government. That’s a funny premise, thanks to the incongruity between adult, candidate-for-president facts and children’s civics facts. The humor puts us just on the other side of plausibility, but the piece distinguishes itself from absurdity by pointing us to a real-world truth: Walker is not that smart but aggressively prepped. “Walker Bummed He Couldn’t Show Knowledge of Iran Deal” isn’t funny and therefore collapses into mere inaccuracy. “Walker Catches Fart In Sandwich, Devours Onstage” is funny1 but does not point to a real referent, so it’s absurd.

In conclusion, satire should be funny and people should grasp it. They often don’t, though, and that’s kind of wonderful. You wouldn’t want a world full of Cookie Greenes, but one or two from time to time is really satisfying.