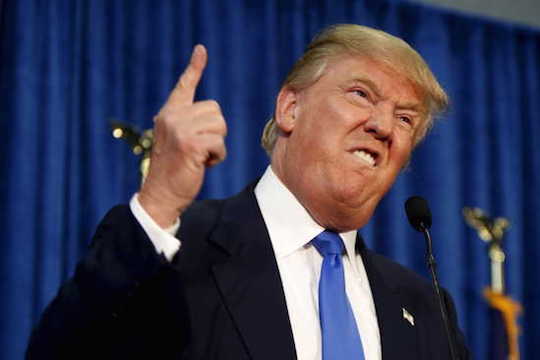 Donald Trump fires somebody, anybody.

The subtext of this New York Times story on big donors’ desire to advise presidential campaigns is that maybe they don’t offer the best advice. Consider this “zinger” that Julian Gingold gave Scott Walker:

“I mentioned that Trump had dinner at the 21 Club in New York with Oliver Stone. The message would get across that he had dinner with a leftist — what sort of conservative are you?”

Dinner with a leftist! It’s the scandal of the season, until Mike Huckabee plays softball with an atheist. Similarly, the Times reports that media mogul Stanley Hubbard was trying to reach Walker in the days before he dropped out of the race, to advise him to get more media training.

These are perhaps not ace political strategies. It makes sense that a professional wealth manager would not know as well as professional campaign managers how to execute a presidential campaign. But the public consensus seems to hold that, if wealth doesn’t necessarily qualify a person to run a campaign, it does qualify them to be president.

As you may have heard, Donald Trump is the front-runner for the Republican nomination. He has never held elected office, nor has he shown an activist interest in national politics before this year. He has donated a bunch of money, though, and he’s got plenty left. His message to the electorate is “I am a businessman.” It implies that a businessman will know how to govern the United States better than a politician.

Certainly, some of the appeal of that message at this moment lies in the widespread perception that politicians are terrible. Outsider status is arguably just as important as business status: witness Ben Carson and the universal impulse among candidates to dissociate themselves from Washington, even when that claim is absurd.

But for every brain surgeon there are two businesspeople, at least among Republican candidates. In America, we measure success in dollars. Achievement in the nebulous career of business, defined by money, can seem like achievement in the field of success. To paraphrase David Mamet, it’s achievement with a universal adaptor on it.

Let us put aside the question of whether Trump—who made his fortune by inheriting millions of dollars and invaluable connections at the beginning of a 30-year bull market in New York City real estate—and Fiorina—who ran Hewlett Packard into the ground—are such great businesspeople. Even if they were, would we want them to run the country?

We don’t want the US government to run a deficit, but we certainly don’t want it to turn a profit. Extracting money from a market by selling goods or services for more than their cost is pretty much the opposite of what we want American government to do.

We want it to be efficient, even innovative, and we want it to act prudently over the long run—all epiphenomena of running a business. But these are also features of a well-run basketball team, a well-run finishing school, a well-run dental practice. The business world does not have a monopoly on doing things right.

The business world doesn’t have a monopoly on producing people who think they can do other people’s jobs, either, but it seems to be outperforming the competition. The feature that qualifies businesspeople to run for president might not be competence but hubris.

It takes a robust ego to run for president. Probably, the confidence of your average senator is just as overweening as your average CEO, but at least it remains confined to the field where it developed. A senator who left Congress and submitted his resume to run General Electric would be laughed out of the conference room, if he ever got an interview.

It’s good we look for people from outside politics to run our government, since it speaks to America’s democratic spirit. As insular as politics has become, we still resist the establishment of a political class. But American government is more complex than ever before, and it’s reasonable to think it demands a specialized set of skills.

Perhaps our political class does a worse job now than it did 50 years ago. But if people who have devoted their lives to government can’t get it right, why should we expect other people to do it properly on the first try?