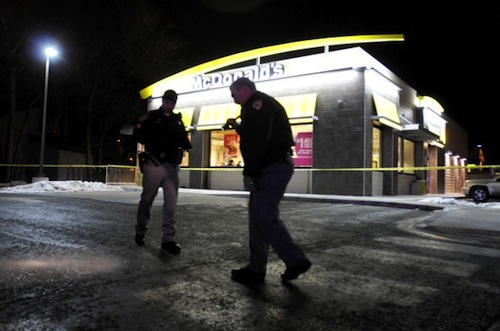 Arguably the grimmest photo of Missoula ever taken, courtesy of Kurt Wilson at the Missoulian

Along with many other upstanding citizens of Missoula, I live behind the Taco Bell. It’s a residential block tucked into the corner made by Rattlesnake Creek and Broadway, which, like all Broadways, is a river of filth. Mostly it’s gas stations and fast food, plus some motels. Last night, as I was coming home, I heard a tire pop. I had stopped to get the mail, and I briefly considered what it would be like to hear that sound and then feel a searing pain in one’s neck. I am of that turn of mind, and I lived in a neighborhood where gunshots were often heard. Not anymore, though, I thought as I went inside. Then I watched a series of squad cars scream down on McDonald’s, and the rest was news.

I am not sure how I feel about the news that a Missoula police officer took a shot at a woman while serving a warrant for parole violation. Definitely, Dawnette Eaton is an asshole. I don’t know what caused her to try to drive away from/over police as they tried to arrest her. Perhaps she has poor judgment. She clearly has insufficient regard for human life, and I want to make it clear that running over a police officer is not cool. Do not use your car as a weapon. Don’t use it as a means of evading arrest, either.

That said, there is a difference between those two things. The Missoulian report does not make it clear when the second officer fired at Eaton—whether it was as she was backing into the first officer or as she was driving away. In either case, it was definitely close to the McDonald’s, surrounded by motels and fast food restaurants and houses, on one of the most heavily-trafficked streets in the city. In this environment, seeing his partner hurt and the woman who hurt her fleeing the scene, Officer Two shot at a moving car.

Now seems like a good moment to commend his marksmanship. Can you imagine how this story would read if his plan had worked slightly better? If Eaton had backed into Officer ONe, started to drive off and was shot cleanly in the back of the head? Similarly, had Officer Two’s aim been slightly worse, he might have just sent a bullet through the Motel 6 or down Broadway or, God forbid, into the Taco Bell. None of those things happened, though. Officer Two did not kill a 47 year-old woman while bringing her in for a parole violation, nor did he shoot an innocent bystander. He winged his target, and she briefly got away before being apprehended later.

Probably, he is a hero. Officer One, who found herself dragged under a car while trying to do her job, is almost certainly one. I would be remiss in my citizenship if I did not point out, however, that the Missoula PD engaged in some cowboy shit last night. Let us consider the alternatives in Officer Two’s decision to shoot Eaton:

Scenario 1: Eaton violates her parole and gets away; she lives.

Scenario 2: Eaton violates her parole and does not get away; she dies.

As it turned out, Officer Two’s B+ marksmanship yielded a result somewhere between the two. I do not have much sympathy for Eaton, whose impulsive idiocy jeopardized the life of another person. Yet I am not exactly relieved to know that Officer Two is out there patrolling the streets of my little town, willing to shoot at a car as it drives away. That’s the kind of decision that could easily lead to a horrible ending, had he been just a little better or worse with his gun.

You don’t have to live here to know that the Missoula police are a little unusual. Locals know that they are likely to let you go for drunk driving, and the Department of Justice suspects they will also let people go for rape. They are known to frisk a pretty woman in the course of a public intox stop downtown. Fortunately, they are not known to shoot you dead in the course of enforcing a parole violation after a drug charge, nor are they known for drilling a toddler in McDonald’s while trying to do so. But that one could have gone either way.

I don’t know where a quirky small-town police force becomes a problem. I do know that I am rarely relieved to see a cop in this town, and I have heard more stories of aggressive and/or incompetent policing here than I ever did in New York. Maybe I’m being an asshole, and Officer Two should be commended for bravery and quick thinking. Maybe, though, a police culture that tells an officer to shoot at a woman’s car as she drives away is not the healthiest thing for my little mountain town.