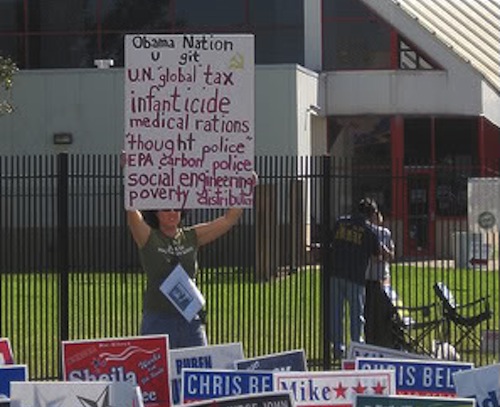 Image courtesy of our platonic friends at moronswithsigns.blogspot.com.

First of all, when is Obama gonna get going with the infanticide already? He’s been in office for fifteen months now, and I haven’t seen even one centurion dash a Christian child against a tall palm. Maybe that’s because I haven’t been looking in Florida, though. The New York Times has conducted what appears to be the first semi-scientific poll to determine Tea Party demographics, and found that “the 18 percent of Americans who identify themselves as Tea Party supporters tend to be Republican, white, male, married and older than 45.” That shouldn’t surprise anyone. What is counterintuitive is that Tea Party supporters turn out to be, on average, richer and more likely to hold college degrees than the general public. The majority describe the amount of money they paid in taxes this year as “fair.” They usually or almost always vote Republican, 57% of them hold a favorable opinion of George W. Bush, and a plurality of them believe that Sarah Palin is unqualified to be president. And 25% of them say that the federal government under Barack Obama favors blacks over whites. Sounded almost sane there, for a second, didn’t they?

The news that the Tea Party comprises*

a vast sea of old white people should come as no surprise to anyone who has looked at the photo accompanying the Times story, or at the interactive “Voices of the Tea Party” video gallery. The splash page for that thing looks like a series of mug shots of elementary school crossing guards—with the exception of one “Roach McKrackin,” who is possibly fake and definitely seeking some form of attention. What is surprising is the discovery that the Tea Partiers are overwhelmingly well off and college educated. During the many, many hours we’ve devoted to baseless conjecture about who these people might be, the going assumption has always been that they are part of the white portion of the great American underclass. The emergence of the Tea Party neatly coincides with two events, after all: the election of Barack Obama and the terrifying collapse of the US economy. While their attention has focused on the former, the most logical explanation for their genesis seemed to be in the latter. The economy bites it, retirees see the value of their homes and pensions decline, near-retirees suddenly worry about their job security down the stretch, and everyone becomes paranoid about the country’s financial future. The Times poll suggests that narrative is correct, with one minor addendum: the people who are outraged that the federal government isn’t giving them a fair shake happen to be doing a lot better than most of their fellow Americans.

The upper-middle-class, college-educated white Republicans of the Tea Party seem unaware that they are winning the rigged game they decry. This brings us to the feature of the Times poll that is least surprising: besides race, wealth and political orientation, the main factor uniting adherents to the Tea Party is ignorance manifested as contradiction. The write-up is sufficiently illuminating here to merit quoting at length:

When talking about the Tea Party movement, the largest number of respondents said that the movement’s goal should be reducing the size of government, more than cutting the budget deficit or lowering taxes. And nearly three-quarters of those who favor smaller government said they would prefer it even if it meant spending on domestic programs would be cut. But in follow-up interviews, Tea Party supporters said they did not want to cut Medicare or Social Security — the biggest domestic programs, suggesting instead a focus on “waste.”

Exactly what is the point of reducing the size of government, if not to cut the deficit and/or lower taxes? This sort of ideological approach suggests that small government is as much a slogan to the Tea Party as it is an actual plan. That theory is supported by the discovery that, despite their fervent opposition to the welfare state and federal spending, those interviewed did not wish to reduce the two most significant instances thereof. The notion that “waste” could amount to anything near the 39% of the budget devoted to Social Security, Medicare and Medicaid is absurd. It’s almost as if these people had no idea what they were talking about.

Then again, it could just be that they benefit from those programs. It’s hard not to notice that the married, rich, college-educated Baby Boomers of the Tea Party are A) part of the wealthiest (fact) and most coddled (unfair conjecture) generation in American history, and B) have been largely responsible for the conduct of the American government over the last 30 years. It’s not like they sprang into being as fully-formed retirees last year, only to have their constitutional rights stripped from them by a nation of 25 year-old black socialists. The out-of-control federal government they suddenly fear grew to its present size under presidents Bush, Reagan and Bush, all of whom they

presumably voted for.* The finance, insurance and real estate economy they say has ruined the nation was built to supply them with suburban homes and college educations for their children. Now that they’ve reaped the benefits of deregulation and no-tomorrow tax structures, they’re angry at greedy Wall Street and irresponsible Washington. Now that they don’t need a social safety net—except for Social Security checks and Medicare insurance—they’ve decided that it’s unconstitutional, except for Social Security checks and Medicare insurance.

As Alan Brinkley (yes, that Alan Brinkley) points out, the Tea Party is very much a movement of people afraid that they might be displaced from power. He notes that, for all their talk of the danger posed by federal debt, the majority of them say they would prefer lower taxes and higher deficits to higher taxes and lower deficits. In the final analysis, the Tea Party is a national political groundswell of selfishness masquerading as ideology. In this sense, it is the logical continuation of the Baby Boomer project. The generation that remade the nation in the image of its adolescence, and called it a revolution, is now trying to remake government for the security of its own retirement, and calling it a revolution. They say they’re worried about the future of America, but the only future that concerns them is the next 25 years.