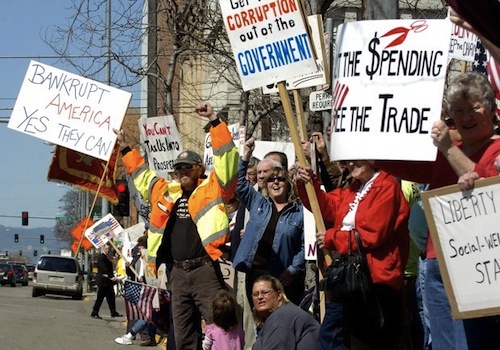 Tea Party protestors outside the Missoula post office, where I heard the phrase "blacks and Democrats" three times while trying to mail my taxes

When I was a kid, I used to love reading Cal Thomas. For those of you who did not grow up with the Des Moines Register, your premiere newspaper for stories about pie and dogs that saved their owners from fires through barking, Thomas is a syndicated political columnist who combines the confidence of a small-town minister with the intellectual curiosity of a small-town minister. As near as I can tell, he hasn’t been right about anything in 30 years, and a surprising number of his columns begin with dictionary definitions, but I couldn’t stop reading him. At the risk of oversimplifying my fascination, getting angry at Cal Thomas made life feel important. Some perverse quadrant of my fourteen year-old brain knew that the baffled, sputtering indignation I experienced trying to follow a Cal Thomas argument expanded the sum total of my consciousness.*

As a series of girlfriends would later remind me, the more you feel, the more you are alive—even if that feeling is bitter, frustrated anger. Today is Friday, and soon the weekend will enfold us in its boozy, maybe-trying-to-tell-us-something-and-maybe-just-being-affectionate arms. It will demand from us a new, more vibrant mode of living, and as usual five days of drudgerous toil will have deadened us until we feel somehow unequal to the task. As a palliative—by which I mean an irritant—Combat! blog offers a collection of links to things that enrage us, whether by their ignorance, their audacity, or their audacious ignorance. Sure, they’re horrifying, but we can’t look away. What separates us from the animals, after all, if not our love of lingering upon what separates us from the animals?

Of course, not everyone in America is composing 800-word meditations on why their male friends masturbate to the pictures of themselves they posted on the internet. Some of us, like the Oklahoma Tea Party, are also forming armed militias. “Frustrated by recent political setbacks,” says the Huffington Post, “tea party leaders and some conservative members of the Oklahoma Legislature say they would like to create a new volunteer militia to help defend against what they believe are improper federal infringements on state sovereignty.” Initially I was going to seize on the phrase “frustrated by political setbacks,” but then I got to thinking about “some conservative members of the Oklahoma Legislature,” and now I don’t know what to do, except point out that, having tired of electoral politics, conservatives in Oklahoma have instead decided to get a bunch of guns together. “Is it scary? It sure is,” said tea party leader Al Gerhart, “but when do the states stop rolling over for the federal government?” To which the student of history calmly replies, NEVER, YOU DICK! THE CIVIL WAR DEFINITIVELY ESTABLISHED THAT THE AUTHORITY OF THE STATES IS SUPERSEDED BY THAT OF THE FEDERAL GOVERNMENT. ASS!

Excuse me. I got a little excited about the possibility of the Tea Party decided that American democracy has become so broken they need to explain their political positions at gunpoint, given what we learned yesterday about their comparative wealth and success. It’s almost as if a group of armed, ultranationalist, pro-business and anti-poor-people members of the middle class who are definitely not fascists had begun to abandon the mechanisms of representative government. Fortunately, we have Tunku Varadarajan, also in the Daily Beast, to remind us that the these people “are not a bilious, lunatic, unschooled, racist rabble out to sabotage our first African-American president, but are, instead, passionate, educated, middle-aged, middle-class and relatively prosperous critics of the Obama administration.” Varadarjan cites the Times survey we discussed yesterday to back his claims, although he doesn’t say exactly how that date refutes any of the aforesaid accusations besides the “uneducated” part. Instead, he spends the bulk of his article railing against the “mainstream media,” whose coverage of the Tea Partiers has unfairly cast them as extremists. Of course they’re not extremists: they’re just a patriotic coalition of white people whose concern that our duly elected black president is a socialist tyrant have led them to declare the current government unconstitutional.

For real extremists, you need to go right to the source: the Minnesota Republican Party. I can’t think of any other noticeably crazy political figures connected to that group right now, but I can tell you that the Minnesota GOP has officially endorsed Joel Demos, the Pentecostal minister who says that the Antichrist is rising and that “We may in 2009 witness a new heaven. We may witness the very last days of this world in this very year.” That hasn’t stopped him from filing papers for the 2010 election in Minnesota’s 5th congressional district. Demos is on tape speaking in tongues, which may prove a liability when it comes time to address a political constituency that has not come to his church to hear him explain how God wanted us to invade Iraq and the ends times as described in Revelation are fast approaching. Still, with any luck, this man will have the power to establish national carbon emissions standards by January of next year.

Should Demos win, he’ll hardly degrade the overall facts-to-fantasy ratio of our legislative branch. The above video begins with Senator Mitch McConnell (R–KY, net worth $16 million) alleging that the proposed bill to regulate Wall Street will require the federal government to bail out “too big to fail” financial institutions. It’s an odd claim to make, considering A) that the bill is designed precisely to avoid such scenarios in the future and B) the legislation uses a tax on banks to create a fund for liquidating failing institutions instead of bailing them out. Then again, it’s not so odd, considering it mirrors a memo written by strategist Frank Luntz on how best to defeat Wall Street regulatory reform. You might remember Luntz from the campaign to torpedo health care reform, or from this post about what a sad, deceitful man his appears to be. It’s nice to know that the Senate minority leader is now willing to repeat verbatim the strategy memos of an acknowledged financial industry hack. But hey, I heard Obama has taken over half the economy. We don’t want another bailout! That’s why I’m against regulation, and also against reading anything that might provide a basis for my political views. I’m an American, dammit. I get my news the old-fashioned way: from people yelling outside the post office. Farewell, week in American democracy. From hell’s dark heart, I stab at thee.