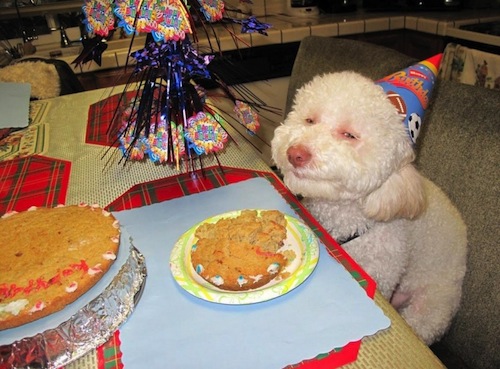 The original filename for this image was “smug dog,” which is now the brand name of my line of yoga accessories.

Today is my thirty-fifth birthday. Now that I have ascended to the top of my demographic, I have only one more year of enjoying the exact same things as an 18 year-old. After that I like Family Circus, Harley-Davidsons and voting Republican. These sorts of changes don’t happen very often, as this poll analysis from the Times indicates. It starts out with some boring stuff about Paul Ryan and the base and a car salesman in Des Moines who is not related to me, but then you hit this:

A series of recent polls in six swing states showed that only 5 percent of voters were undecided and only about 1 in 10 likely voters who had chosen a candidate said they were open to switching. At this point four years ago, more than 1 in 4 voters nationwide said they might change their minds.

Anticipated total spending this election cycle: one billion dollars. Find out who’s going to win after the jump.

Spoiler alert: it’s Obama. Obviously it’s too early to say, but everybody says it’s him anyway. The most recent polls from ten swing states are organized around a few key themes: narrow margins, slight Romney upticks after the VP announcement, the president wins. Given the unseasonably low number of undecided and switch voters—and the selection of Paul Ryan, who appeals far more to the base than to centrists—it seems likely that Obama’s little lead will persist. Again, it’s super early, and who knows what will happen? The answer is I do, because it’s my birthday, and I say Obama is going to win. If I’m wrong come November, you can revoke my birthday and I will spend another year being thirty-four.

So here’s a fun question: how would the Republican Party react to an Obama victory in 2012? We know how they reacted in 2008: by freaking the fuck out and dedicating themselves, openly, to making him a one-term president by any means necessary. It turns out pretty much all means were necessary, including but not limited to downgrading the credit of the United States, and in our hypothetical it hasn’t worked. In the meantime, both parties have spent the aforementioned $1 billion to achieve bitter victory/narrow defeat. That is daunting.

Maybe that’s the scenario in which the GOP calls off total war and goes back to governing with the president they’ve got. Or maybe my birthday prediction is completely untrue—maybe Romney wins, and the Dems become the party of frothing, belligerent opposition. I don’t think so, though. I think this is the election where both parties spend record amounts of money, one of them wins by two percent, and everybody decides that hysterically negative politics is not the killer strategy we thought it was.

Yet again, we operate in the realm of pure birthday conjecture. Still, I think it is possible if not likely that the quantitatively most expensive election in history—and the qualitatively most shrill one—will force a re-evaluation of political priorities. Maybe it’s not worth it to spend a billion dollars to decide whether to cut $500 million from public broadcasting. Maybe it is unwise to squander two years of House control to get two points in the next presidential election. Maybe—and this is insane, I know—the presidency is not even that important.

My birthday wish is that A) Obama wins in November and B) both parties stop acting like rival football teams and start acting like rival football greenskeepers. They can compete and sabotage each other all they want, but I would like the prize to be not victory but proud maintenance of a lush playing field. A game is where parties compete to defeat each other. A project is where parties compete to do stuff. I would like to see our two parties sicken of the game.