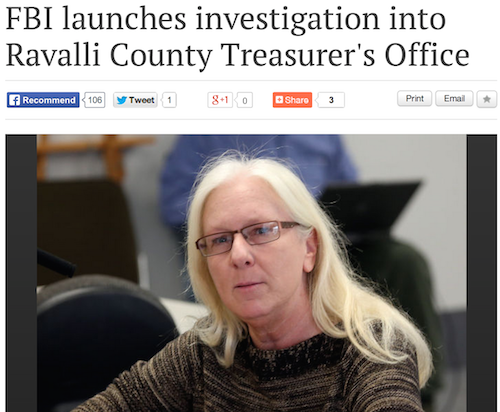 A screen cap from Friday’s Missoulian

The best-case scenario in the Ravalli County treasury fiasco got a little more likely over the weekend. Part One—Valerie Stamey turns out to have done almost no work at all between her appointment in September and her suspension in February—is already in place. That’s more fun than the news consuming public reasonably could have asked for. But dare we hope for Part Two? I am referring, of course, to the unlikely but entertaining possibility that county commissioners really have been illegally selling tax liens, as Stamey alleges. Probably they haven’t. But now the FBI is involved, so oh man—if they have.

Probably you do not write a column about Montana politics for your local newspaper, so this story may not be as much of a godsend to you as it is to me. Still, it’s an incredibly fun scandal, in no small part because of Stamey’s willingness to drag out and worsen it at pretty much every turn. When she claimed to have uncovered evidence of a corrupt conspiracy between commissioners JR Iman and Greg Chilcott, I assumed that it was to cover for not having any progress reports, again.

Still, in my heart of hearts, I nursed the hope that she was right. Probably Iman and Chilcott have done nothing wrong, but I wanted to open my browser and read a gradually unfolding tale of dumb versus evil. The best part of the Stamey saga is that her refusal to explain her claims tantalizes us with the possibility that any of them might be accurate. It’s a continual tension between skepticism and hope, since even when Stamey explains herself, she doesn’t make anything clear:

That’s an okay explanation of a how a property tax lien works, although her claim that the person who owns the lien can “take your property away from you” after 36 months is missing the part where the lienee has to pay you for it. The larger issue, though, seems to be that Stamey read a newspaper article about an improperly filed property tax lien in Ravalli County and decided that virtually all county liens had been improperly filed.

Again we encounter the recurring question of the Stamey Affair: which is more likely?

When you put it that way, the odds of finding any merit in Stamey’s accusations seem kind of thin. Even her understanding of how a tax lien works is flawed. How could she be qualified to determine that a whole swath of liens were illegal based on her understanding of an article about a judge’s ruling? Reading something in the newspaper and deciding that a standard government procedure is illegal is, if you’ll pardon the generalization, some real Tea Party shit.

But the FBI is investigating. From the perspective of our tantalization theory of Stamey, that’s the best thing that could possibly happen, since the feds probably will not accidentally tell The Missoulian about an investigation in progress. We are going to know nothing about this lien thing for a long time, leaving open the possibility, however small and dim, that Stamey really did stumble upon a county conspiracy.

If I had to bet money right now, I’d bet she didn’t. Probably, Stamey will leave Ravalli County the same way she left Carolina: ignominiously, trailing summary judgments. But news of the FBI investigation is thrilling in much the same way it’s thrilling to see the alien’s tail in Alien. It offers a morsel to our imaginations, which can entertain us for a little while longer before we see the guy in the rubber suit.