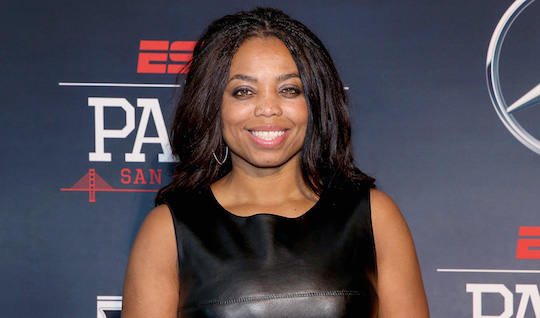 In the 21st century, the go-to move when someone expresses an unacceptable opinion is to try to get them fired. It’s a consequence of internet discourse: you can’t reach out and slap someone for, say, making a problematic joke about race and AIDS, but you can harness the power of social media to crowdsource complaints to their employer. When it comes to censoring bad speech, work is the new government. It was therefore kind of whiplash-inducing to see the original government—Government Classic, if you will—appeal to the power of ESPN to silence someone.

Monday night, SportsCenter host Jamele Hill tweeted that the president “owed his rise to white supremacy.” Conservative media has criticized ESPN for being too liberal,1 and the network duly chastised her for “inappropriate” remarks. Now seems like a good time to pause and point out that Hill’s tweets were probably unwise, from a career standpoint, but they are hardly inappropriate. There are good arguments to be made that Trump does owe his political success to white supremacists,2 and it’s appropriate for any American to criticize him for that. Anyway, despite this display of corporate submission, Sarah Huckabee Sanders said today from the White House briefing room that Hill ought to be fired.

Maybe there’s a precedent for a White House spokesperson saying in an official capacity that a critic of the president should lose her job, but I can’t think of one. It’s crazy, first of all, that the White House would even take notice. Huckabee Sanders’s remarks came in response to a direct question about Hill, but still—the obvious play is to say “who?” and move on. Setting aside the dignity-of-office issue, though, it’s nanners for the White House to single out one of the president’s critics and call for her to be fired.

Is ESPN supposed to understand these remarks as a request from the president? Will the most powerful man in the world be mad at the cable network if they don’t fire Hill? And if they do, what new era might it signal in American democracy? You don’t need bills of attainder when the executive branch can wreck the career of anyone whose criticism catches the attention of the president. Anyway, the important thing is that even as fundamental norms of American democracy break down, the Law of Trump Tweets remains inviolable: