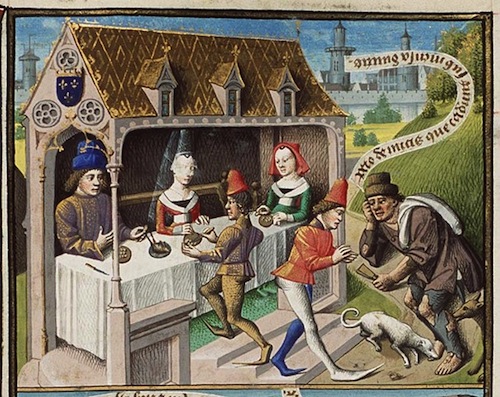 You can tell he's really poor, because a dog is gnawing on his foot.

Now that a new Congress has convened and pledged itself to beating back the deficit we accumulated out of nowhere in the last two years, we have to think about poor people. Personally, that’s something I try to limit to the ten or so minutes it takes me to get in and out of Taco Bell, but it so happens that A) poor people are where we’re going to trim the deficit, since wars, social security and tax cuts for the rich are utterly indispensable, and B) present conditions mean that there are a lot more of them. It turns out that a high school dropout and a 40 of Old English isn’t the only way to make new poor people. You can also do it with a massive economic contraction. As any recently unemployed person will tell you, those are the good kind of poor people: the ones who love work and being responsible, but who through no fault of their own have been temporarily deprived of their opportunity to do either. Such hard-working, down-on-their-luck Americans are the ones we are obliged to help. But how to do it without also giving professional poor people a free ride?

The tension in this epistemological knot can be measured by just how difficult it is to figure out what we spend on welfare, period. Last year, the federal government spent a little over $1.3 trillion on so-called entitlement programs, but the lion’s share of that amount went to Social Security and Medicare. We don’t usually think of those entitlements as welfare, even though they are free money from the government that you get for not being able to generate money yourself.

The difference, of course, is that Social Security and Medicare go to old people—that is, poor people who used to not be poor and now need welfare through no fault of their own. Such entitlements are, at this point, the weft in our national fabric, and we don’t think of them as welfare because we expect to one day get them ourselves.*

Unfortunately, that distinction exists more in our minds than it does in our budgets. If you Google “federal TANF spending” or some other combination of [welfare program]+federal+[budget/spending/], you get a bunch of essays from the Cato Institute but very few hard numbers. Presumably, someone knows how much money we spend on this stuff, but that knowledge is not readily accessible.

I mention this for two reasons: to make excuses for my failure to find hard numbers for y’all and to point out that our welfare system is inordinately complex. The federal government gives money to people directly and it gives money to the states; some of it goes to old people and some of it goes to the classically poor, some of it is food stamps and some of it is student loans, and the whole thing resembles a plumbing diagram more than a stream. Let us compare this approach to one recently adopted in Brazil: just giving money to poor people directly.

In addition to delivering the terrifying news that the United States may soon have a less equal distribution of wealth than freaking Brazil, the Times article tells us that the heavily federal welfare system in that country pays money directly into the accounts of poor people when they complete certain tasks. Poor parents get money when they take their kids to the doctor; they get paid to attend workshops on nutrition and disease prevention, and their kids get a cash reward for graduating from high school. To put it bluntly, poor people in Brazil get paid to stop acting like poor people.

The result, it would appear, is that they stop being poor people. Since 2003, the poverty rate in Brazil has fallen from 22% of the population to 7%. Some of that is doubtless due to the country’s changing economic fortunes, but some of it is also attributable to their Give People Cash and They Won’t Be Poor Anymore initiative. This brings us to an ethical dilemma. Isn’t it morally wrong to give people money just because they’re poor?

The answer is, “Only if you think of poor people as different from regular people in some way besides how much money they have.” In the United States, land of opportunity and home of the Protestant work ethic, that may be true. Poor people may be constitutionally lazy and paradoxically scheming, and it’s possible they stay poor because they’re always on the lookout for ways to get by while working as little as possible. Even if that’s true, though, I submit that it shouldn’t affect how you think of welfare spending.

Indulge me in a decision tree. If you think poor people are just regular people who had bad luck, you should be in favor of welfare spending, since there’s no reason you won’t someday become poor yourself. It’s like insurance. If you think poor people are fundamentally different from regular people, then you shouldn’t think of welfare as a system of helping at all; you should consider it a system of maintenance, like road repair. Under this rubric, poor people are a born problem, and the choice is not between paying money for their upkeep and not having them, but between having relatively contented poor people and having them wandering the streets looking for opportunities.

The only logically untenable position is the one that holds that poor people are A) fundamentally lazy and B) therefore don’t deserve help. It presupposes an immutable nature for part (A) and then treats that nature as a choice in part (B). Unless you think that people should be morally judged for their inborn, unchangeable characteristics, you can’t have it both ways.