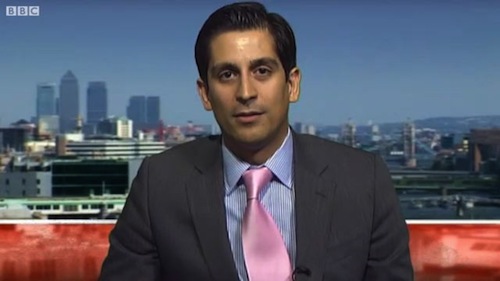 On Monday, a trader named Alessio Rastani told BBC interviewers that he was “dreaming of another recession” and that “governments don’t rule the world; Goldman Sachs rules the world.” It seemed like bad news. Rastani’s candor—some might call it glee—in describing how he profits from the kind of large-scale economic disaster in which we’re currently living also made it seem like a hoax. Several Twitter wags accused him of being a member of Yes Men, the group of agitprop performance artists who impersonate corporate spokespeople to draw attention to, well, the kind of thing Rastani talked about. But Yes Men has disclaimed him, and Rastani is an actual private day trader, as near as the BBC can tell. If he is a Yes Man, the organization is fielding much better actors, as this 2006 interview with a Dow Chemical impersonator suggests. That’s what a fake interview looks like. Rastani looks real, but what is he?

Here’s our boy on the BBC, explaining that his principal concern as an investor is not helping the world economy recover but rather making money:

He doesn’t do much to sugar the pill, but he’s hardly revealing the secret agenda of world finance. He’s merely acknowledging that he and other traders have investment strategies for volatile markets, a point that he elucidates in this Forbes interview. Yet his remarks were enough for Gawker and various other sources to declare him a sociopath. This business about dreaming of another recession is a bit much—Rastani should try to get more use out of the recession we already have—and his claim that “the savings of millions of people are going to vanish” is chilling. But what Rastani is describing—a financial system in which investors can make money independent of whether the economy succeeds or fails, and regardless of whether their work benefits anyone—is no different from the operating principles of Goldman or anybody else.

No trader at Goldman or any other large house could go on television and say such things, of course. Yet in the broad outrage of the commentariat, there is a sense that Rastani is not just uniquely candid but also uniquely rapacious. He isn’t. The vague investment philosophy he describes finds specific iterations in short selling, high-frequency trading and other practices that have become standard behavior in the financial industry.

That may be the problem. What’s missing from Rastani’s description of his role within the global economy is any indication that he is helping anyone, producing any valuable product or even creating any jobs. And yet he is a millionaire. His weirdly exhilarated recounting of how he is the guy who bet you wouldn’t be able to pay for your house gives the lie to the conceit that financial markets buoy the world economy. They do, in the sense that they provide large corporations with ready capital. In all other regards—in the traditional way that we think an economy is supposed to work, by helping more resources get to more people and converting labor to value—they don’t.

He therefore cannot be real. If he is, we have to accept the idea that one of the largest segments of our contemporary economy and the only one to make a decent recovery is enormously bad for most people, or at the very least not good. Alessio Rastani essentially argues in this video that you can become one of the richest members of society simply by agglomerating a bunch of money and moving it around. That is absolutely true, and we’ve got the finance/insurance/real estate economy to prove it. But it is an affront to any idea of wealth based on hard work and economic reward based on economic contribution.

For Americans, particularly invested in both the financial industry and the idea of wealth as a product of work, it’s an ugly thing to watch. Our present tax code is very favorable to people like Rastani, and at least half of our political leadership looks to men like him to lead us out of the recession. We want to believe that what’s good for Goldman is good for America. We want our millionaire investors to be job creators. To hear otherwise is like finding out that your girlfriend is only dating you because you have cable.

The financial industry does always seem to come over when Boardwalk Empire is on. They made a lot of money in the first half of last decade and they maybe bankrupted the country in the second, and then we gave them billions of dollars to get back on their feet. The expectation was that they would pull us up with them. Now that we’re into our fourth year of lying on the ground and watching them apply lipstick, the possibility that what they say is true and what they do is what it appears to be seems too heartbreaking to bear. This can’t be real, we tell ourselves. It just can’t be.