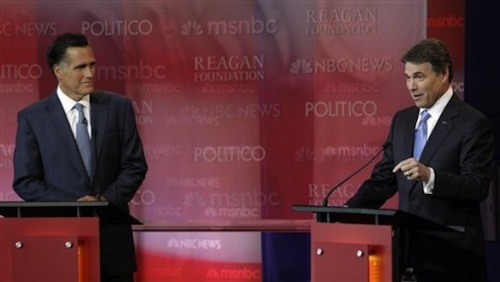 I've got Romney fever. I can tell because my temperature is 98.7 degrees.

Yesterday, Rick Perry told an audience in Jefferson, Iowa that “as the son of a tenant farmer, I can promise you I wasn’t born with four aces in my hand.” First of all, beware people who apply the word “promise” to statements of fact. Second, he was alluding to Mitt Romney’s remark in the Florida debate that “being dealt four aces doesn’t necessarily make you a great poker player,” meaning that job growth in Texas wasn’t necessarily Perry’s doing, and correlation does not amount to causation. That translation is why I’ll never be President, right there. The American people—even Republicans—don’t want to vote for someone too fancy. Contemporary conservatism is for rich people, but it’s not about rich people; it’s about the assumption, latent in every patriotic heart, that we will eventually become rich. The great contradiction of American politics is that the President should be an ordinary guy.

That’s pretty much never the case, of course. Famed President with whom you’d like to have a beer George W. Bush was the son of a previous President and went to boarding school in Connecticut, but he affected a Texas/childhood-lead-exposure drawl nonetheless. Champion of the downtrodden Franklin Delano Roosevelt was derided as a traitor to his class by his fellow gazillionaires. Even Abraham Lincoln, who grew up so poor that he had to read books for amusement, was the son of a land trader. Even in America, which enjoys social mobility both real and imagined, the odds are against a child born poor becoming the most powerful person in the nation. It just doesn’t work that way.

But the feeling around election season is that dammit, it should. Hence a major obstacle facing Mitt Romney—here I use “obstacle” in the sense of “thing that has facilitated virtually every achievement of his life”—is that his father was the millionaire governor of Michigan. It’s the third element of the Romney/Perry dichotomy: rich, northeastern and moderate versus homespun, Texan and fundamentalist. Except Perry maybe did not come up so poor. Even in The Texas Tribune’s Rockwell-esque portrait, his parents are tenant farmers in his early childhood but also ranch owners and, in the case of his father, the county commissioner. That’s a far cry from Governor Romney, but it ain’t Sonny Liston, either.

Perry’s attempt to cast himself as more déclassé than he is comes from a long tradition in presidential politics. During the 1840 election—one of the first after the enfranchisement of all white male citizens, and held during a depression to boot—William Henry Harrison ran the famous Log Cabin Campaign. Harrison was a war hero—this was the period when “wars” were fought continually against Indians and heroism was measured in total kills—who presented his opponent, Martin Van Buren, as an out-of-touch elite. Harrison was the “log cabin and hard cider candidate,” according to himself—a man of the people who eschewed luxury and comfort. In fact, Harrison was the candidate from a wealthy family, and Van Buren grew up working class. But no matter—Harrison’s campaign worked, and he went on to deliver the longest inauguration speech in US presidential history. It was bitterly cold that day in Washington, and Harrison contracted pneumonia and died a month later. Seriously.

The point is that a good way to become President is to be a rich man who pretends to come from poor roots. Perry’s background is more authentically log-cabinish than Harrison’s—and far more so than Romney’s—but he’s hardly a commoner. Even if he spent his childhood as the sharecropper he implied he was, he would still be a millionaire. That he became one while governor of Texas is hardly an endorsement of his sterling character.

The great irony of contemporary politics is that, in their marketing at least, the Republicans are the party of ordinary people and humble roots while the Democrats are the educated elitists. Both parties are surely more responsive to millionaires than to tenant farmers, but at least the Democratic policy agenda has something to do with helping the common people so many politicians purport to be. This is perhaps the most valuable lesson to be taken from Rick Perry’s log cabin campaign. Even as he cites his humble roots, he draws a hard line against tax increases for millionaires and aid for the poor. Weirdly, that strategy appeals more to the common man. The American dream is not that poor people will be treated well; it’s that poor people will become rich. Just now, we’re nearing that season when rich people become poor.