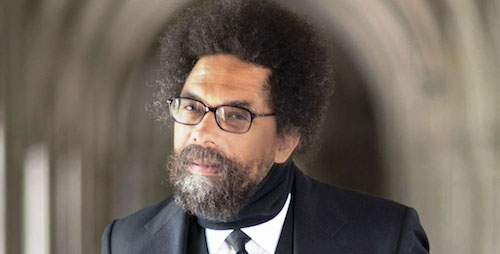 Cornel West, who would never succumb to affectation

The Cure sent me a link to this interview between Cornel West and Thomas Frank, in which they agree that everyone is extremely disappointed with President Obama’s failure to be more progressive. They seem to mean everyone they know, which may be a closed epistemic circle. But I’m less interested in West’s assessment of what everyone thinks than his use of the word “brother.” For example:

So if West does not use “brother” to invoke the idea of a human or American family—if he in fact uses it when explicitly refuting that concept—what does he mean? Close reading after the jump.

First, a little context. From pretty much the beginning of the interview, Frank and West agree that Obama has turned out to be a “counterfeit” progressive. This criticism has merit, insofar as a lot of people expected him to address the financial crisis and Wall Street abuses far more aggressively than he did, and many of us are disappointed by his continued use of, say, secret prisons and aerial drones.

But with the exception of that secret prison, Obama did not actually say he was going to smash Wall Street and undo the Bush administration’s security state. He implied it, but a lot of us also looked at the young black man running for President at a moment when America was maximally disillusioned with Republican politics and kind of assumed. Obama was a centrist his whole career, but we wanted him to be a progressive president.

Here I use “we” the same way Frank and West do, to mean “liberals I know.” We feel like Obama tricked us, when really he wasn’t what we hoped/assumed he would be. And let’s be real: some of that hoping/assuming happened because he is black. West captures this sentiment neatly, if not nicely, in his recent remarks to Politico regarding Al Sharpton:

Brother Martin [Luther King, Jr.] himself, I think, would’ve been turning over in his grave. We saw the coronation of the bona fide house negro of the Barack Obama plantation, our dear brother Al Sharpton.

There’s that word again, appearing in a context that does not suggest affection for the brother named. The White House is a plantation, and brother Sharpton is the worst kind of race traitor. It’s tempting to say West uses the term as an ironic derisive. But in the sentence immediately before, he also uses it for King, whom he obviously respects.

West also consistently applies “brother” to himself, particularly when he is reporting other people’s speech. For example:

Here we enter a realm of pure hyperbole. Who knows how many times people have actually said the phrase “he pimped us” to West re: the president—fewer than a zillion, probably. And who knows how many of these people call him “brother.” The only thing we know for certain is that is how he refers to himself.

The obvious denominator is that West uses “brother” to refer to black people. But he does not use the phrase to imply that African-Americans are necessarily unified: witness his reference to Sharpton. Nor does he use it to call for a broader unity among people: witness his admonishment, brother, that we are not a family.

West seems to use “brother” to invoke his own blackness. He insistently refers to himself as “brother West.” He uses it when he calls Sharpton a house negro, an insult that asserts the speaker’s own, more authentic blackness. And he uses it when he attacks Obama’s idea of an American family. Like the president’s failure to live up to a promise that he never made, West can criticize this rhetorical plea for unity on the authority of his own race.

Cornel West is so black that even though he has been a university professor for the last 30 years, he describes himself as “an aspiring bluesman in a world of ideas and a jazzman in the life of the mind.” He’s so black that I wish he were a lot more careful and honest. But maybe that’s the whole problem.