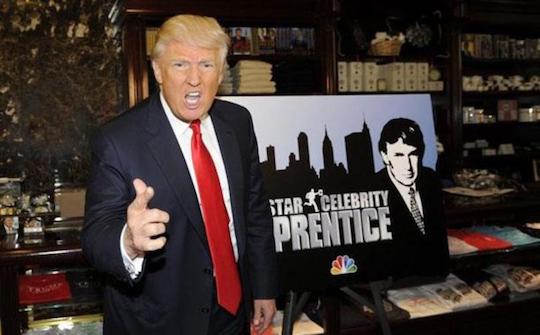 Trump on Celebrity Apprentice, since we don’t yet have pictures of him in the Oval fucking Office

I wrote this week’s column for the Missoula Independent on Monday, when all I could think about was the outcome of the election. It ran this morning, which, as you may have heard, is after the election. The conceit is that I hedged my bets for either outcome, in a column about local traffic light replacement that didn’t need to mention the election at all. I can’t tell if it’s funnier this way or not. Probably the part about stamping tin hats for war with Mexico isn’t really going to happen, but you be the judge. I admit that, as I wrote it, I was picturing a Clinton presidency. What makes God laugh? A plan. We will not be back tomorrow with Friday links, because I am on my way to New Orleans for a much-needed dudes weekend. This, too, was planned with a Clinton victory in mind, but I bet we’ll have fun anyway. In the meantime, keep batting ideas around in the comments. We’ve got the whole future ahead of us.